PDA specialists Mark Wright and Michelle Keegan are engaged. Mark proposed to his soap star girlfriend on a romantic holiday and the pair are delighted. Apparently Michelle was more shocked than anyone.

Mark Wright proposed to Michelle Keegan on a romantic holiday in Dubai.

The besotted ex-TOWIE star had planned out the whole thing including designing the ring himself.

A source told the Daily Mail: "It was a really big surprise for Michelle. Mark proposed to her on the beach during their holiday in Dubai."

Mark reportedly chose Dubai as it holds special memories for the couple; the pair first got together at a New Year's Eve party in Dubai last December.

Sources also told The Mirror: “Mark planned the proposal for some time. For the past few months he has known that Michelle is The One and wanted to surprise her with a romantic proposal.

“After designing the ring himself – which he has been describing as a ‘monster rock’ – he took it to Dubai.

"The place is special because it’s where they had their first official kiss. Both are blissfully in love and Michelle is utterly made-up.”

The couple are expected to wed with a six-figure magazine deal.

The 26-year-olds flew back to the UK yesterday and are yet to confirm on Twitter but they were looking as loved up as they were tanned.

Time will tell if this engagement will last - it is Mark's second after he split from his first fiancée Lauren Goodger two years ago.

Michelle was also once betrothed to another - Max George from the Wanted.

The pair were together for a year and half, but called off the engagement with sexting claims being made about Max after the break-up.

Let's hope this time around it's drama free for the both of them.

Do you think it will last? Tweet us @SofeminineUK 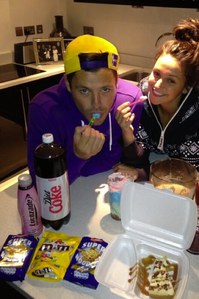