What a year Miley Cyrus is having, right? She chops all her hair off, releases a new album, ends her four year on-and-off relationship with super hunk Liam Hemsworth and besmirches the good name of the foam finger. Now she is reportedly “definitely dating” the heir to Rolling Stone magazine, Theo Wenner, and has opened up about her relationship with ex-Liam Hemsworth.

The We Can’t Stop singer Miley Cyrus has had a rollercoaster of a year with her career, family and relationships.

This came to a peak in September this year when it was announced that she and Liam Hemsworth had officially ended their on-and-off four year relationship, after having met co-starring in coming of age romantic drama The Last Song.

But 20-year-old Miley hasn’t let herself wallow while eating several tubs of Ben and Jerry's like a normal person.

The six year age gap would make little difference for Theo, as in 2011 he dated Liv Tyler, 36, despite the substantial age gap.

According to Radar, Miley “communicates with Wenner several times a day and says the pair are dating, albeit casually."

“Miley talks about how hot Theo is and how nice he’s been to her. She’s definitely completely in lust with him.”

This revelation comes shortly after Miley appeared on the Ellen DeGeneres’ chat show on Thursday and broached the subject of her ex-fiancé, saying:

“I believe, when a chapter is over, you have to close it and start a new one.

“That’s kind of where I am right now. My album is the story of that. I knew more intuitively where my life was going than I thought.”

Apparently she is well on the way to starting a new chapter with her new beau, as Radar reports that Miley left her Bangerz album release party to meet him.

“He didn’t come to the release party, but she snuck out at one point and went and met him at the Plaza.”

Despite rumours of a new fella, Miley told Ellen DeGeneres that she is perfectly happy without any man in her life, a sentiment that her father, Billy Ray Cyrus, has reiterated on Twitter.

Wanna know how I feel as a Father?Just heard my daughter say@MileyCyrus "I'm the happiest I've ever been in my whole life".All I ever wanted

“I’m the happiest I’ve ever been,” says the Wrecking Ball singer.

​“That’s not a dig. I’m genuinely happy with myself and sometimes it takes separating yourself from someone to realise that…I’m obsessed with being alone right now.”

Do you think Miley is still a single pringle? Tweet us @SoFeminineUK 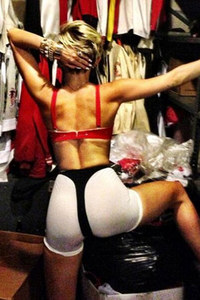