Miley Cyrus has given an exclusive interview with Cosmopolitan magazine, in which she is at great pains to stress how loyal and faithful she is to those she loves. In what seems like a thinly veiled jab at ex-fiancé Liam Hemsworth, Miley warns that she will never let someone back in her life if they’ve let her down…

Miley Cyrus has given a very candid interview to Cosmopolitan magazine where she talks honestly and openly about loyalty.

The 20-year-old doesn’t mention her former fiancé by name, but she does seem to infer that she wouldn’t put up with anyone messing her around.

“It’s like, once shame on you, twice shame on me. You’re the dumb one if you let someone back into your life and they sh*t on you again.”

It was rumoured that Hunger Games star Liam had been seen getting cosy with Mad Men actress January Jones whilst he was still with Miley, which was allegedly one of the contributing factors of their split.

However Miley isn’t letting a broken heart get her down, as she’s hard at work promoting her chart-topping album Bangerz and getting geared up for her 2014 tour.

“It doesn’t stop if the album goes to No.1. I’m thinking about touring, artists I want to work with, cool videos I want to make. It’s so much like, grab the moment,” she says.

“The best advice I’ve been given was from Cyndi Lauper – she told me to go and lasso the moon, meaning don’t be afraid of anything. Just go and do anything you want to. I thought that was pretty cool and poetic.”

The fearless singer has recently come under fire for her raunchy VMAs performance – even from Robin Thicke who shared the stage with her – but Miley is unapologetic about her twerking escapades.

Talking about their onstage duet and the subsequent media storm, the former Hannah Montana star admits: “Yeah, that was kind of bittersweet. It wasn’t supposed to overshadow everyone else; it was meant to be fun. But hey, it got the most tweets in history…”

She adds: “I live without any regrets – you can’t change anything, so I don’t think about it.

“I’m good to work with. I’m proud of that; I have a good reputation.”

Although many have labelled Miley as a party girl, she’s at great pains to stress that she’s actually not a social butterfly, but rather a stay-at-home kind of girl.

“I’m a homebody and actually not as hyper or as sociable as I seem. I have a small group of five close friends who all pretty much work for me; everyone else is just an acquaintance.”

Do you think Miley is misunderstood? Tweet us @SofeminineUK!

The full interview appears in the December issue of Cosmopolitan, on sale 7th November. Also available in digital edition on Apple Newsstand. 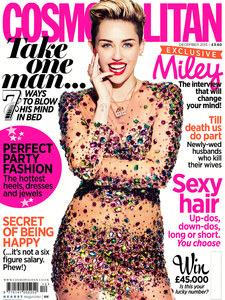