It was one of the most talked about award ceremony performances in history. And let's be honest - most of the talk was not complimentary - but Miley Cyrus wasn't bothered. The pint-sized pop star thought nothing of stripping and thrusting like no other up on that VMA stage. And apparently there are some (just a few) who agree that it was acceptable and enjoyable. Here are five reasons people think Miley's provocative twerking was just fine...

1. She's not a little girl anymore

Miley Cyrus found fame on the Disney Channel as Hannah Montana when she was young, but now she wants everyone to know - she is not that sickly sweet long-locked girl anymore.

She chopped her hair off, stopped wearing trousers and generally started to try and out-do controversial star Rihanna.

Justin Timberlake spoke about the 20-year-old's performance on a radio show recently and didn't see what the fuss was all about.

2. Showbiz is one big circus

After facing countless complaints over her risqué performance, Billy Ray Cyrus spoke out to defend his daughter’s butt-thrusting show.

The former country music star told Entertainment Tonight: "Of course I'll always be here for Miley. Can't wait [to] see her when she gets home.

"She's still my little girl and I'm still her dad regardless how this circus we call show business plays out.

"I love her unconditionally and that will never change."

We guess he can't really ground her...

3. It made perfect business sense

Despite massive backlash, Miley has certainly got us talking about her.

She was trending on Twitter for no less than four days after the VMAs.

Her management has reacted to the performance with pride: "We were all cheering from the side of the stage. It could not have gone better. The fans got it. The rest eventually will."

4. It was actually all about Robin Thicke...

Miley has come under fire for many aspects of her performance, including her choice of PVC bra and pants.

Kelly Osbourne spoke about her outfit on E!'s Fashion Police.

She had her reservations about Miley's moves, but added: "We're not talking about her performance, we're talking about what she's wearing.

"It's not that original but I do appreciate it's reminiscent of the Blurred Lines music video."

The VMAs is apparently when class takes a night off.

The best dressed list was remarkably short this year and there seemed to be a secret memo to most of the guests that we can only guess read: "Skin for the win."

With that in mind, it seems at this award ceremony anything goes.

Justin Timberlake continued his defence of Miley with the comment: "It’s the VMAs - it’s not like she did it at the Grammys. Madonna? Wedding suit? Humping on stage? Britney’s striptease? This is not an uncommon thing.” 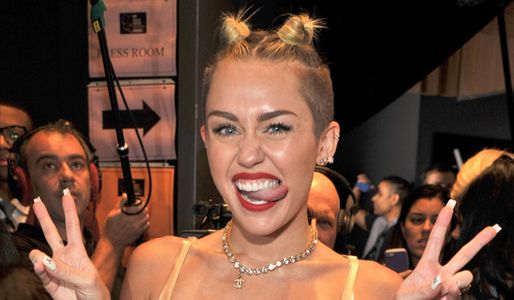 What did you think of Miley's performance? Tweet us @sofeminineuk

Francesca Menato
…
Awardsnaughty
For all the best videos, memes and shareable news!