We can't say we were expecting it, but we're very happy for her - Nadine Coyle is pregnant! The Irish star announced her happy news via her Instagram account. Now we'll wait for the congratulatory messages to flood in from her former bandmates...

Nadine Coyle has revealed that she's pregnant with her first child.

The former Girls Aloud singer, who lives in America, decided to reveal the news on Instagram.

She posted a photo of herself on stage, with red writing over the top that read: "I'm having a baby. Xx."

Nadine is the first of her former bandmates to fall pregnant.

Her fans reacted with shock at the news.

Another said: "Well this is probably the most unexpected news I ever thought you'd tweet !! Congratulations! Xx."

A third fan added: "Congratulations @nadinecoyle. You're going to be an amazing mum! Does this mean its time to swap heels for flats?"

And another commented that she thought Nadine's former Girls Aloud bandmate Kimberley Walsh would fall pregnant first, as she's been dating her boyfriend Justin Scott for more than 10 years.

The father of Nadine's baby is thought to be her American footballer Jason Bell, who she's dated on-off for three years.

They ended their engagement in 2011 but are thought to have rekindled their relationship in recent months.

Jason even travelled to the UK to see Nadine perform with Girls Aloud at London's O2 earlier this year.

He then joined Nadine - plus Sarah Harding, Nicola Roberts and Kimberley (Cheryl Cole was poorly) - for a night of partying at Whisky Mist. 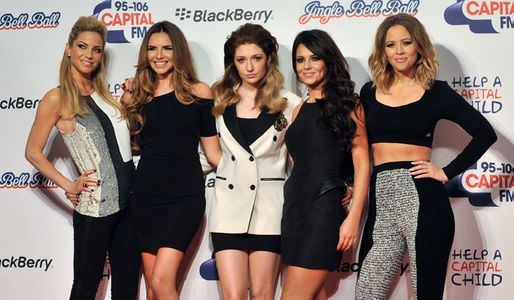 This page is temporary unavailable,

Reload | Back to homepage