Spencer Matthews has been snapped completely in the buff and yes, we have the photo. The Made in Chelsea star is a self-acclaimed love rat, and has flitted through the MiC girls with his Lothario ways, so frankly we’re sort of surprised this hasn’t happened sooner. This isn’t the first time one of our favourite Chelsea boys has been caught in the buff either – man-child Jamie Laing has also been caught out. Come on boys, where’s your dignity?!

Spencer Matthews has been caught absolutely nude – and don’t worry, Twitter knows about it.

The resident Chelsea heartbreaker was snapped in the doorway of a bedroom by an anonymous lounging lady whose legs are visible in the shot.

The picture was posted on Twitter by user @NotbasedVicky with the caption: “Didn’t believe my mate slept with him so got this photo as proof. Lol @SpencerGeorgeM sorry hun.”

But who is this mysterious girl, and what will wronged exes’s Lucy Watson, Stephanie Pratt and Louise Thompson think about it? They’ll probably have a field day, we would have thought.

So far Spencer hasn’t acknowledged the picture, although he did send a cryptic tweet yesterday saying: “Whether you be a lover or a hater… (Probably a hater)… Thanks for the new follows! #600k.”

It may take some recognition before it is 100% verified that the photo is indeed of Spenny, but it certainly looks like him!

This isn’t the first time that a Made in Chelsea man has been caught in the buff either, as Jamie Laing’s ex-girlfriend Tara snapped a picture of him at a hotel back in August.
​
Which boy will be revealing all next? Who votes Stevie?! Tweet us @SoFeminineuk 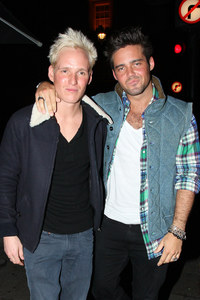