To be on Made In Chelsea you've got to be a fan of drawing attention to yourself, however we're not sure even class clown Jamie Laing wanted this kind of attention! Girlfriend Tara Keeney tweeted a very revealing picture of the blond yesterday - in which he's totally starkers and ready for action.

We can imagine half of Chelsea has seen Jamie Laing's manhood.

Well, now this number has gone up considerably.

Jamie's girlfriend Tara Keeney leaked a snap of the lost boy in what should have been a rather private moment.

Spencer Matthews' best bud can be seen in all his glory, clearly hoping for more than just a photo shoot...

The picture of Tara's man appeared for a short moment on Twitter on Sunday evening before it was quickly removed.

Just seen a leaked picture of @JamieLaing_UK this morning. All I can say is WOW. #MorningGlory

Unfortunately for Jamie, not quickly enough.

The shot has been making the rounds on the social media site as some 'fans' made use of their computer's screen shot function.

The couple have both remained silent on the matter, most likely hoping it will become buried under other Twitter trends.

Well for the few seconds Tara Keeney uploaded that picture I screenshotted several times, what is she playing at

Tara and Jamie have gone through their ups and downs following his minor discretions on the reality show.

The pair have been together for about a year and are no strangers to expressing their affections on Twitter.

Tara Keeney just posted a naked picture of Jamie Laing, don’t like it 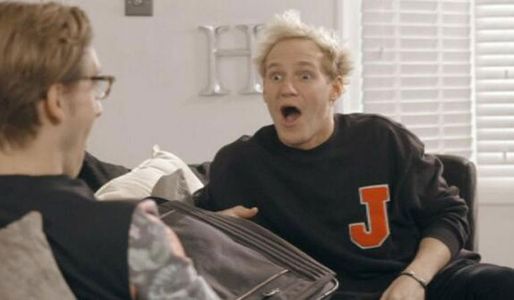