They are two of the most powerful women in the British fashion industry, but currently fashion designer Victoria Beckham and supermodel Naomi Campbell are not seeing eye-to-eye. The hot-tempered model recently called out the former Spice Girl for the lack of black models in her catwalk show this past September, personally confronting Vic on her responsibility to help encourage diversity in the fashion industry.

Victoria Beckham’s catwalk shows have become one of fashion’s biggest events, and her last London Fashion Week show was her most critically successful to date.

But one person who wasn’t happy with the LFW show was supermodel Naomi Campbell, who is currently campaigning for more ethnic diversity on the catwalk.

Only one non-white model walked in Victoria Beckham’s 30-strong model show, something which didn’t go unnoticed by Naomi.

The Face presenter helped to draw up a list of all the offending design houses who similarly had very few models of colour, as part of a campaign to expose discrimination in the fashion industry.

The supermodel then reportedly called Victoria personally to discuss her inclusion on the list and ask what action she would take so this didn’t happen next season.

Naomi told the MailOnline: “I called Victoria and I spoke to her. I don't want to pin-point anyone. It isn't a blame game. Everyone's name was on that letter because they'd done it.

“It could have been completely unintentional. She is one of the designers on there like everyone else.”

While the Naomi has been quite honest and open about her fashion feud with Victoria, the mother-of-four has not spoken publicly about her chat with The Face host.

In recent years Naomi and Victoria have been supportive and complimentary of each other, but they didn’t always enjoy the close friendship they have now.

Back in 2000 the model asked why Victoria was known as “Posh”, while the Spice Girl dubbed Naomi a “massive cow” for being such a mean girl.

However the pair made up when Victoria got involved in Naomi's Fashion for Relief Flood campaign in 2008 and since then they've remained close friends.

In 2010 Naomi gushed: “I love Victoria Beckham's dresses. I've worn many of them before. I've also got her jeans. I love her work and she's a great friend and mother.”

Hopefully Victoria and Naomi managed to sort out their differences and the fashion designer will make the necessary changes to her model selection when she showcases her next fashion collection.

Do you think Naomi was right to call out Vicky so publicly? Tweet us @SofeminineUK! 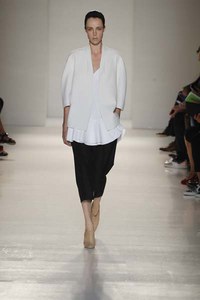 by the editorial team
+
All the news about Naomi Campbell