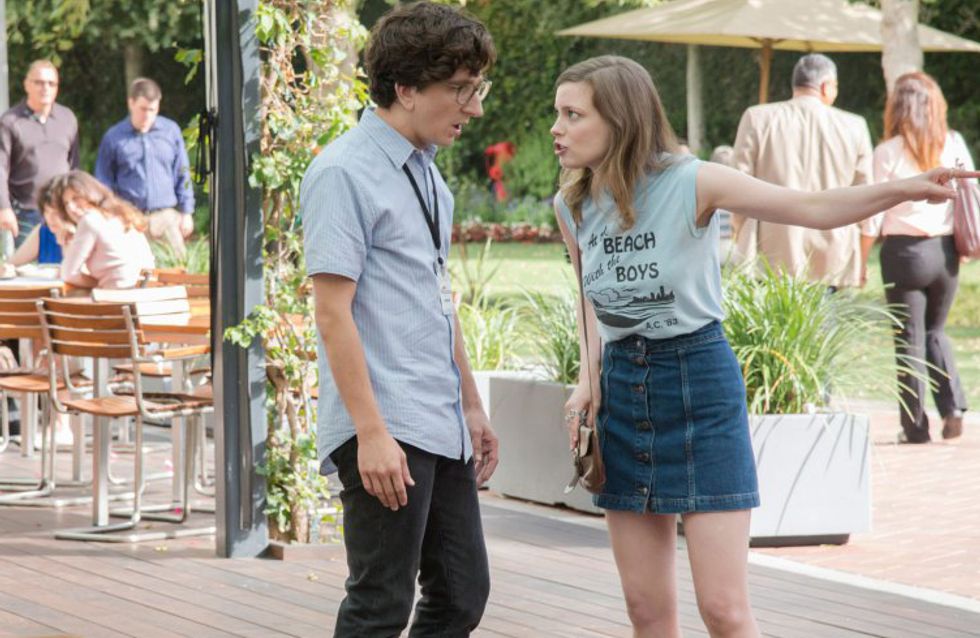 Netflix is going by the 'go hard or go home' rule when it comes to their programming schedule in 2016, as today they announce a whole bevy of new Netflix Originals coming to our screens in the coming months. Here's all the new shows you need to clear your schedule for this year.

Everyone knows Judd Apatow is the ultimate king of 21st century comedy. Long-time Apatow fans will remember his early work on Undeclared and of course, the cult classic series Freaks And Geeks. More recently Judd has been producing and writing on Lena Dunham's HBO smash hit series Girls and has dabbled in writing for The Simpsons. But now he is back as executive producer and writer on Love, a Netlfix original comedy series which he created with actor Paul Rust (who also acts in the series) and Lesley Arfin, who also writes for Apatow's other project, Girls. It stars Gillian Jacobs - who everybody should know from Community - as 'loose cannon' Mickey, who strikes up an unlikely friendship with Rust's timid nice guy Gus.

You'll love this if you like: Girls, Freaks and Geeks, any Judd Apatow movie

Now that Downton Abbey is over, we finally have another British drama to fill our time with. The official synopsis for The Crown goes something like this: "the inside story of two of the most famous addresses in the world – Buckingham Palace and 10 Downing Street – and the intrigues, love lives and machinations behind the great events that shaped the second half of the 20th century”. It opens on a young princess Elizabeth (played by Claire Foy), faced with the prospect of soon becoming the reigning queen of England, and follows her through her relationships with the two important men in her life, for very different reasons: first, Prince Phillip, played by Matt Smith, and Winston Churchill, played by everyone's favourite, John Lithgow. Netflix have placed an immense amount of faith in The Crown, putting £100 million into the making of the series. But it is in safe hands, it would seem: the show is written and created by Frost/Nixon writer Peter Morgan (who also wrote The Queen, so he knows his royals), and directed by Stephen Daldry, who was nominated for an Oscar on three seperate occassions for his work on Billy Elliot, The Reader, and Extremely Loud and Incredibly Close.

You'll love this if you like: Downton Abbey, Dr Who, Frost/Nixon, and anything to do with the British monarchy

Will Arnett is fast becoming our favourite Netflix Original-er. Flaked marks his third Netflix Original series after Arrested Development and the hilariously funny cartoon Bojack Horseman (y'know, the one with the super addictive closing theme tune?). We don't know much and there's not a trailer yet, but we do know is that in this new show, Arnett plays Chip, a self-help guru in California who gets involved in a love triangle with his best friend. It also stars Superbad hero Christopher Mintz-Plasse and Pimeval's Ruth Kearney. Arnett will also serve as a producer alongside Arrested Development creator Mitch Hurwitz, which is a promising sign for the comedy.

You'll love this if you like: This character already has a strong resemblance to Gob, so give Arrested Development a go.

Is Chelsea Handler the new Louis Theroux? Probably not. But she does have her own documentary series coming out with Netflix this year, which'll see her taking on drugs, marriage, racism and Silicon Valley in classic Chelsea style - which means plenty of swearing and inappropriate behaviour, but we wouldn't want it any other way.

You'll love this if you like: Chelsea's talk show or her stand up, An Idiot Abroad, Louis Theroux's Weird Weekend.

Orange Is The New Black Season 4

Yaaaaas! It's back! Orange Is The New Black has finally got a release date, which isn't until June mind you, but at least now we can pencil it into our diaries! At the end of the last season, there was overcrowding at Litchfield, Daya had her baby without Bennett, Alex may be dead, Piper's love Stella was sent to max, and there was a new inmate in the form of the new Martha Stewart, Judy King. We've been promised plenty of new characters, and we'll finally be able to find out what happens to Alex. Excited is an understatement.

You'll love this if you like: Orange Is The New Black obviously! We recommend re-watching all three series before Season 4 starts in June.

If you've watched Netflix's Jessica Jones, you'll recognise Luke Cage. He's the hot bartender with the indestructible skin, a terrible past and an awesome ability to go from gentle to terrifying in a split second. It was definitely a performance worth watching, so we can’t wait to see him in centre stage to find out more about the shady experiments from his past and, of course, to see how his relationship with Jessica progresses. If this means a few cameos from Krysten Ritter, we are totally fine with that.​

And speaking of Jessica Jones, she'll be back for Season 2 later this year. It's not sure who will be returning to the writer's room for the next series, but after defeating David Tenant's mind-controlling Kilgrave, our girl Jess will be going toe to toe with a new villain. Stay tuned for more info!

You'll love this if you like: the first season of Jessica Jones, Daredevil, Agents of S.H.I.E.L.D.

Good news for Baz Luhrmann fans: he's back, and this time for TV. His new series The Get Down sees Luhrmann doing what he does best: musical dramas that you love to sing along to at the top of your voice. The series is set in 1970s New York, following a group of teenagers from the Bronx as they find their way, as Netflix put it: "armed only with verbal games, improvised dance steps, some magic markers and spray cans. ... The Get Down is a mythic saga of how New York at the brink of bankruptcy gave birth to hip-hop, punk and disco -- told through the lives and music of the South Bronx kids who changed the city, and the world... forever." ​ The series stars Justice Smith (Paper Towns) and Jaden Smith (The Pursuit of Happyness) and Breaking Bad's Giancarlo Esposito, as well as a wealth of new and unknown actors. Our advice? Warm up your pipes before watching this one, because there's going to be plenty to sing along to.

You'll love this if you like: Moulin Rouge!, ​The Great Gatsby.

Yes, the woman who introduced us to Kimmying (smiling until you feel better - try it, it works sometimes!) is BACK. And not only has it been confirmed that there will be a season 2, but a season 3 has been secured before season 2 has even aired. When we left Kimmy, she had just sent Reverend Richard Wayne Gary Wayne (the delectable Jon Hamm) to prison, Jacqueline was embracing her Native American heritage, Dong got married to Sonia from GED class, and Titus unveiled that he's married... to a woman. In terms of what's going to happen to Kimmy in the new season, Tina Fey told the Radio Times: “Now she's got deeper emotional and life issues that she kind of has to really get into, and that’s more what this season is about.” Whatever happens, I'm sure it will have us Kimmying all over the place.

You'll love this if you like: Saturday Night Live, 30 Rock, Mean Girls.

Netflix will be taking over the helm of Charlie Brooker's dark satirical drama, producing 12 new episodes. And after one of Brooker's storylines seemed to take a...ahem... realistic turn last year (watch The National Anthem if you want to know what we're talking about!), there seems to be more hype around the dystopian drama than ever. Brooker has been quoted saying that Netflix is “the most fitting platform imaginable” for the new series: "“Netflix connects us with a global audience so that we can create bigger, stranger, more international and diverse stories than before, whilst maintaining that Black Mirror feel. I just hope none of these new story ideas come true.” So what can we expect from the new series? Plenty more depressing, comedic predictions of our future, probably.

You'll love this if you like: Charlie Brooker's Weekly Wipe, all other episodes of Black Mirror, Nathan Barley, Garth Marenghi's DarkPlace.

You remember Full House? It's like that, only fuller. Fuller House brings back together the classic cast members of the original sitcom. Well, almost all the cast members - Mary-Kate and Ashley Olsen, who between them played the youngest family member Michelle Tanner, have decided not to return. But don't worry, because the super hot John Stamos will definitely be back, and that's all that's important. As well as the Full House veterans, there will be a whole host of new child characters in there too.

You'll love this if you like: Full House, probably.

Are you excited about any other Netflix Original shows? Let us know! @sofeminineUK

Why You NEED To Watch Netflix's Terrifying Documentary, 'Making A Murderer'​​​

What To Watch: 10 Netflix Shows You Will Love​