It's been a long time coming but the Liam Hemsworth/Miley Cyrus split has finally been confirmed. We're not sure how long they've been separated, but Liam's already finding comfort with another very hot woman. He was spotted canoodling with Mexican actress Eiza Gonzalez in Las Vegas. What makes the whole thing a touch more awkward is that the girl in question posted a mocking tweet about Miley around a month ago. Bit harsh...

Over the past month it has seemed painfully obvious that Miley Cyrus and Liam Hemsworth were headed for splitsville - if they weren't there already.

Representatives for the couple have now confirmed the break-up to People magazine.

The pair have been dogged by split rumours for months since getting engaged last year.

Despite recent insistences that this was all just media speculation, it seems they have now drifted apart beyond repair.

Many believe that Miley's recent VMAs performance was the straw that broke the camel's back for their relationship.

There is also speculation that her recent single release - Wrecking Ball - is about her difficulties with actor Liam.

The 20-year-old singer has been moving further and further away from her Disney image over the past few years.

But it looks like her fiancé wasn't too happy with the dramatic transformation from the girl he met on The Last Song in 2010 to the thigh-high wearing, elfin-cropped twerker she is now.

After apparent pressure from friends and family, Liam looks like he's moving on just fine.

He's been photographed in Las Vegas, where he was enjoying VIP parties at a star-studded boxing match.

And while at club Bungalow the Hunger Games actor was spotted getting very close to Mexican actress Eiza Gonzalez.

The 23-year-olds were said to have been side by side all night.

They were partying with a group of five of Liam's mates and some other beauties.

The pair started out at their VIP table but quickly moved on to a more private cabana.

At one point she was seen flashing her enviably long legs while sat on a sideboard as Liam stood close staring - impressively - into her eyes.

The MailOnline reports that the pair left the club together at 2am.

It's always painful to hear about your ex moving on but it's got to be even worse if the girl in question mocked you online a month before!

The glamazon posted a photo of herself in a panda hat - echoing Miley's video for We Can't Stop - and captioned the snap: "Miley style...jajajaja".

On 11th September she also left a cryptic message on her Facebook, which could have been about Liam.

She wrote: "It must be very difficult to accept the fact that the person you're interested in lives in love with someone else #oops #goodluck! #whengoodisgood!"

Funnily enough, like Miley, Eiza was also a child star - she found fame at 16 in a Mexican telenovela.

She is now a superstar in her country.

Miley recently unfollowed Liam on Twitter, so we're guessing this is over for good - it doesn't get much more serious than that! 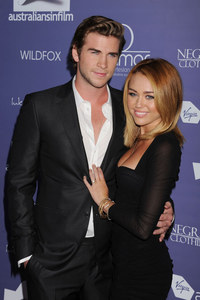