It’s always tricky buying Christmas presents for those you love and care about. But Niall Horan clearly doesn’t have any problems picking out what to get his best mates and One Direction band members. The Irish star has revealed what Louis Tomlinson and Harry Styles will be getting under the tree – lets just hope the pair of them don’t read this beforehand though as that will ruin the surprise!

Niall Horan is clearly the most organised out of the One Direction boys as despite the fact it’s still November, he’s already picked out what to get his closest pals.

Previously, Liam Payne said that they generally don’t get each other gifts for the festive occasion, but Niall is obviously getting into the Christmas spirit already.

With millions at his disposal, the One Direction boys can afford to get each other some pretty pricey presents, but Niall appears to be more of a thoughtful – if jokey – gift-giver.

At last night’s Capital Rocks event in London the 1D hunk told ITN News:
“I am going to get Harry a razor because he’s just started growing a beard.” Ouch – that’s clearly a burn for the 19-year-old heartthrob. 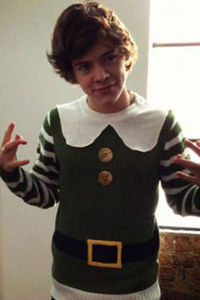 For Liam Payne he seems to be thinking along the same male grooming lines, revealing: “Liam…hair gel! He’s doing this slick thing at the moment.”

Louis Tomlinson probably has been dropping some hints about what he wants for Crimbo, as Niall admitted: “I am going to get Louis this coat he’s been talking about.”

​But it looks like he’s a bit stumped when it comes to soon-to-be-wed Zayn, as the Little Things singer disclosed: “Zayn, I don’t really know what to get Malik…I am the worst person at buying presents.”

We think Niall is being pretty hard on himself - especially as he has already thought up good present plans for the rest of the One Direction boys!

The Story Of My Life singer will also have to pick out a wedding present for Zayn and his fiancée Perrie Edwards soon, but Niall isn’t too worried about that because the pair haven’t set a date for the wedding yet.

He joked to ITN News that he’ll work out a wedding gift only if Zayn “gets the time to pick a date!”

Well with their hectic touring schedule (131 dates around the world!) and the recent release of their latest album Midnight Memories, it looks like the Little Mix singer will have to wait until 2015 to wed her soulmate, which will hopefully give Niall plenty of time to come up with the best wedding gift of all time!

Have you bought all your Christmas gifts yet? Tweet us @sofeminineuk!