It's quickly become common knowledge that One Direction’s new album Midnight Memories was leaked online ahead of its release, and Niall Horan doesn’t seem happy about it! The Internet has exploded with excitement from the bands insane…ly awesome (good save?) fans, who were all torn between listening to the new stuff and remaining loyal to the band’s true release date. Either way, Niall was not a happy bunny!

One Direction’s new album Midnight Memories was leaked earlier today online, to the delight and incredulity of thousands of 1D fans who by-and-large believe the leak to be deliberate.

But deliberate or not, the new tunes from the Best Song Ever singers meant that One Direction fans went even crazier than usual, especially when one of their leaders - A.K.A band member Niall Horan - tweeted his frustration about the album’s premature release: “That’s annoying !”

This sparked off a boatload of One Directioners tweeting him with apologies, and he eventually replied to one fan who asked him: “Are we still the best fans on the planet??”

He said: “Yeh ye are! You guys didn’t leak it! You guys are the best”

The album was not meant to be released until next week, and it's currently at number two on the US iTunes pre-orders chart.

There is also a treat for Directioners who decide not to cheat their way to the boy’s music and actually pay, as everyone who pre-ordered an album will receive three extra tracks – can’t complain with that!

​The new album is coming out pretty much straight after their world tour, which wrapped up only a couple of weeks ago.

The boys are also due to perform for X Factor’s 10th anniversary tribute show next week, with Niall tweeting:

“It was great to be back home @TheXFactor today! Love that place! Seeing all the crew and contestants and Dermot ! So nerve wracking though”

We can’t wait to see them in action! Can you? Tweet us @Sofeminineuk 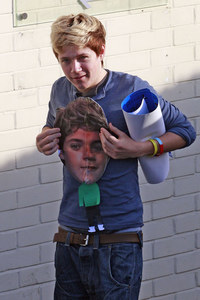