Jennifer Lawrence is definitely Hollywood’s ‘it’ girl at the moment, but that has never stopped her from being her down-to-earth, laid-back self, and apparently it has made her a hit with her boyfriend Nicholas Hoult’s family. Impressing the in-laws hasn’t been an issue for the starlet, as Nicholas’s sister has said they all think she is just lovely.

Jennifer Lawrence may be winning awards for her performance in American Hustle left right and centre, but she has also recently won her in-laws affections (possibly the most difficult and prestigious award of all)!

According to Nicholas Hoult’s little sister, JLaw gets on great with the Hoult clan since the pair recently rekindled their relationship after having been together since 2011 and breaking up in 2013. Apparently the family all spent some time over Jen over Christmas, and fell in love with her as much as the rest of the world. 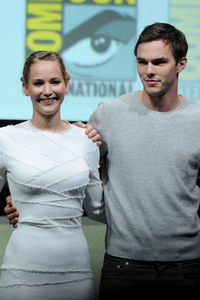 Jennifer allegedly earned her strips with the Hoults by helping around the kitchen, evening making a chicken pie with Nicholas’s dad.

Clarista continued: “She’s really family orientated, so she fitted in well with us. She doesn’t seem like a Hollywood type, she just mucked in. We’re a very unglam family. In our house if you want a drink, you get it yourself.”

Erm, as opposed to most houses that have butlers and ladies maids? Come on now Clarista!

Apparently Nick is one of the people to thank for Jen being so laid back about becoming the most coveted actress in Hollywood, as a source revealed: “Of all the people she has around her, he’s the only one who isn’t a yes person. He’s straight up with her. She needs someone like that, especially now that her life is a whirlwind of Hollywood madness.”

Jen certainly is at her peak at the moment, especially since winning the Best Supporting Actress award at the BAFTAs on Sunday night, even though she received some criticism for the win.

According to Yahoo, the Twittersphere was infuriated that nominee Lupita Nyong’o didn’t win, despite her fantastic performance in 12 years a Slave.

One Twitter user wrote: “I love Jennifer Lawrence as much as the next everyone on the planet, but that one should have gone to Lupita #BAFTAs”, whilst another wrote: “Lawrence won a We Love Jennifer award, basically. Who’s shocked that these things are popularity contests not pure art appreciation.”

Do you think Jennifer’s award was well deserved? Tweet us @sofeminineUK