Nun Sings Alicia Keys On The Voice Italy and Nails It! - The 10 Most Surprising Performances We've Seen 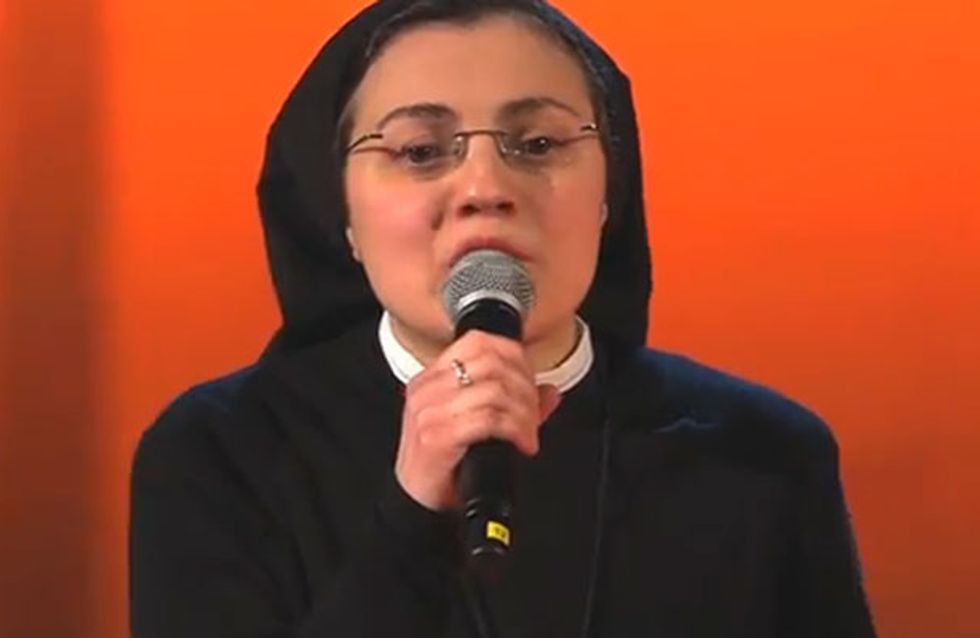 While singing competitions have mostly waned in popularity over the last few years, every so often there comes a moment where they recapture our interest and get us talking. During a recent performance on The Voice Italy, a Nun surprised everyone when she belted out the Alicia Keys hit "No One" and nailed it!

Our mouths were left wide-open when Sister Cristina Scuccia took to the stage to sing the Alicia Keys song "No One" on The Voice Italy. Much to everyone's surprise the nun pulled off a remarkable performance, prompting all the judges to turn around for a glimpse at the singer. Seriously, who could've seen this coming?

Watch her bring the house down below! It's brought back all our favourite Sister Act memories!

Can't get enough? Revisit some of the most amazing surprises to come out of singing competitions...

Susan Boyle - "I Dreamed A Dream" on Britain's Got Talent

Who could forget Susan Boyle's performance of "I Dreamed A Dream" on Britain's Got Talent? It made her an international star overnight. Susan later went on to sell millions of records.

Talk about a win!

We had the exchange of skeptical looks from the judges, the roar of shocked approval from the audience, and the "I wasn't expecting that!" from Mr Nasty Simon Cowell. Neither were we Simon! Neither were we.

When this fella announced he was a gospel choir and Simon Cowell asked if he'd eaten the rest of the choir (not cool Si!), we thought this man was probably a little delusional. So it was a pleasant surprise when his choir began to pop out from the balconies and were incredible!

So this young lady is singing a lovely delicate song, then inexplicably changes her voice into a mans to finish the song. We don't know how she did it, but bravo!

The judges are obviously cynical when this shy fourteen-year-old comes on to perform. They're actually pretty patronising. Good thing she ended up being outstanding!

Charlotte and Jonathan on Britain's Got Talent

Jonathan and Charlotte were an odd pair, but they blew the judges away with their stunning duet.

Connie Talbot - "Somewhere Over The Rainbow" on Britain's Got Talent

She's so small and cute, but just from Simon's face you can tell he can't wait until they've gotten past her onto the next audition. Turns out she's pitch perfect, and the judges are loving it!

Stacey Soloman - "What a Wonderful World" on X Factor

Stacey Soloman is so loveable when she comes out, but we were worried her audition might not be great when she said her mum tells her she's good 'sometimes.' Instead it turns out the girls got pipes!

Craig Colton - "Hiding My Heart Away" on X Factor

When Liverpudlian Craig decides to surprise his parents who are sat in the audience watching the show, he gave us a surprise as well! How can a person's speaking and singing voice be SO different?!

Gareth Gates had a bad stammer when he auditioned for Pop Idol (waaaaay back in the day), but when he sang he was absolutely perfect, who'd knew that'd happen?!

What are some of your most memorable singing competition performances? Tweet us @sofeminineUK