One Direction and Union J lads' night out together

Although One Direction have had a longstanding feud with The Wanted, they’re not at war with every boyband currently topping the charts. It’s warmed the cockles of our heart to learn that the 1D boys have struck up a friendship with their X Factor boyband successors Union J. So much so that the gorgeous boys are all planning a big lads’ night out. Can we come? Please?

With all these boyband feuds, it’s lovely to see two rival groups like One Direction and Union J getting on.

But what’s even more exciting is the prospect of them all hanging out together – although how they will find somewhere big enough to contain all of their hotness we’ll never know.

Although One Direction are currently finishing up their exhausting 131-date world tour, they are about to return from Australia to the UK for a few well-deserved weeks off.

According to Union J, their X Factor predecessors – the Story Of My Life singers – have promised them a night on tiles.

So it would seem that the fresh-faced foursome are not just learning how to be a worldwide successful boyband, but they’re also picking up partying tips from their elders.

Chart toppers Union J revealed their plans for a heartthrob hang out at the launch of their Claire Accessories range on Tuesday night.

Baby-faced George – who has most recently been linked to Selena Gomez – told 3am: “We were arranging it with Niall and everyone to have a night out when they're back."

Acknowledging how much him and wingman Harry Styles would be a dreamy curly-haired duo, George admitted: "There'd be a lot of hair."

As for now it’s not known where the boys will be staging their wonderfully epic night out (although we’re very much hoping to get ourselves an invite to come along!)

Hopefully it will be a precursor to Union J band member Jaymi Hensley’s stag do, as the loved-up singer is planning to get hitched to his long-term boyfriend soon.

No doubt Jaymi and Zayn Malik will be discussing mutual wedding plans, as the 1D member also about to walk down the aisle with his Little Mix girlfriend Perrie Edwards.

We think it’s so cute that One Direction and Union J are friends now! What do you think about their lads’ night out? Tweet us @SofeminineUK. 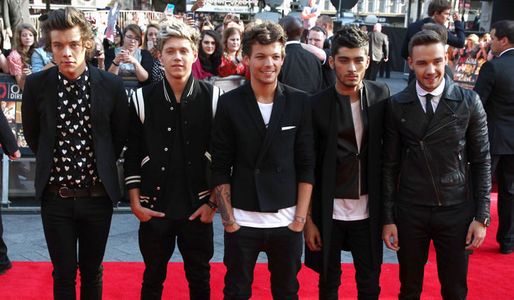