One Direction world tour is taking its toll on Niall Horan

One Direction are only a few weeks from completing their incredibly massive 131-date world tour which is currently in Australia, and apparently the pressure is starting to get to Niall. The 20-year-old One Direction band member has taken to Twitter to tell his legion of fans about his exhaustion from the tour and his excitement for his day off.

Niall Horan of One Direction has taken to Twitter to reveal how tired he has been during the band’s 131-date world tour ‘Take Me Home’.

The band, which is currently in Australia, began the tour in February to the delight of their massive fan base.

However the constant screaming of fans must have worn Niall down as he tweets: “Deffinately needed a day to chill today! I’m sooo tired at the moment! gona do nothing! (sic)”.

Niall has clearly been enjoying himself during the tour though, recently making pals with pro-rugby player Quade Cooper, who tweeted: “Good to meet @niallofficial … Top bloke and can throw a footy! #TheMan #Avmin #GotTheRightShurton”

Deffinately needed a day to chill today! I'm sooo tired at the moment! gona do nothin!

He then tweeted: “@NiallOfficial good to meet you brother.. me n the fams appreciate you taking the time to meet us.. Much love n safe travels.”

Niall replied Quade's tweets, writing back: “Big thanks to @quadecooper for comin down tonight! And giving me his shirt!”
​
Ooooh, American Football Friend.

The One Direction member has also obviously been reflecting on the tour, as he considered all the places they have visited so far, tweeting:

“Just made a list of all the places we've been as @onedirection, every city! All I can say is thank you!”

Just made a list of all the places we've been as @onedirection , every city ! All I can say is thank you !

With this amount of geographical coverage, we think Niall has earned a well-deserved break.

Do you think One Direction have bitten off more than they can chew? Tweet us @SofeminineUK 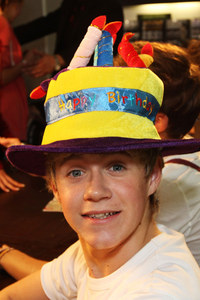