Yesterday it was announced that Peaches Geldof was found dead at her home in Kent. The death is currently being treated by Kent police as "unexplained and sudden". She leaves behind her husband, Thomas, and two young sons, Astala and Phaedra. Her father, musician Bob Geldof, has paid tribute to her in a statement, whilst friends and peers have flocked to Twitter to express their condolences.

Peaches Geldof passed away yesterday at age 25, leaving a husband and two sons. The Kent police who were called her her house around lunchtime yesterday say that the death is currently being treated as "unexplained and sudden."

Her last tweet was linked to an Instagram picture of herself as a toddler in her mother's arms with the caption "Me and my mum". Her mother, Paula Yates, died when she was 11-years-old.

Her father, musician Bob Geldof, has said in a statement: "Peaches has died. We are beyond pain."

"She was the wildest, funniest, cleverest, wittiest and the most bonkers of all of us. Writing 'was' destroys me afresh. What a beautiful child. How is this possible that we will not see her again? How is that bearable?

"We loved her and will cherish her forever. How sad that sentence is. Tom and her sons Astala and Phaedra will always belong in our family, fractured so often, but never broken. Bob, Jeanne, Fifi, Pixie and Tiger Geldof."

Her husband Thomas also released a statement which read: ""My beloved wife Peaches was adored by myself and her two sons Astala and Phaedra and I shall bring them up with their mother in their hearts every day. We shall love her forever. Thomas, Astala and Phaedra Geldof-Cohen."

Celebrities have taken to Twitter to pay tribute to the television presenter and journalist, and offer condolences to her family.

Utterly stunned at the terrible news of the death of Peaches Geldof! The dreadful loss of a really lovely woman

So sad to hear about peaches. My thoughts are with her family xx

Very sad to here about the sad loss of Peaches Geldof aged 25 years old such a shame thoughts and love to her whole family xxxxx :(

I'm beyond shocked and saddened to hear about Peaches. Can't quite digest it. Thoughts and so much love to the family

Poor sweet Peaches Geldof. We spoke only a month ago and she looked like an angel. This is truly sad. Poor Bob! R.I.P

you were a sparkling, lovely person who showed me such kindness. rest easy, peaches

Even if you think you've got it all figured out, some things still can't be explained or understood. Two beautiful children. RIP Peaches

Devastated about @peaches_g. Sending condolences & respect to the Geldof family. It's unimaginable what they must be going through right now

Such sad news, my heart breaks for her beautiful children RIP Peaches, a wonderful soul, Let us all allow her family to grieve in peace ❤️

Just heard about Peaches, so unbelievably tragic. So shocked and sad. Sending my thoughts and love to her family.

The few times I met Peaches she was a sweet, funny warm person. Much love to her family she has left behind.

Peaches Geldof dies aged 25 . What happen there ??? That's a shock

never knew peaches but the loss of a life so young is a horrible thing, especially leaving behind two children.

Tweet us your favourite memory of Peaches Geldof @sofeminineUK 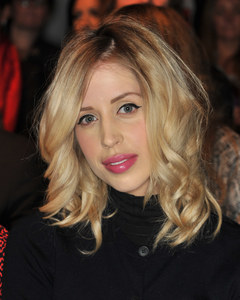