Peter Andre’s life has been a rollercoaster, but it finally looks like things are calming down for the reality star. Following on from his bitter legal battles with ex-wife Katie Price and the tragic loss of his brother Andrew to cancer last year, Peter is now looking to the future with his pregnant fiancée Emily MacDonagh. It looks like the My Life star has finally gotten his happy ending.

The reality star admitted that it was a “devastating” time, but with the help of his fiancée Emily – his “rock” – Pete emerged out the other side and is all set to be a father for the third time in a matter of weeks.

As the couple prepare to welcome their first baby together into the world, the My Life star is excited to spend the festive period with Emily, and his two kids Junior, 8, and six-old-year Princess, from his marriage with Katie Price.

The 40-year-old singer told Now magazine: “I just said to Emily that this’ll probably be the best one we’ll ever have as it’s the first time that she’ll have Christmas as a mum.

“Even though the baby’s not due until next year and we don’t know what we’re having, she’s still a mother – it’s quite an amazing time!” 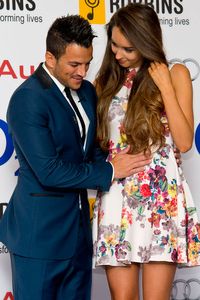 Pete’s obvious joy is a far cry from last year, when he faced a whole host of legal battles from his bitter ex-wife Kate Price, whilst also dealing with his brother’s illness.

The reality star is keen to focus on enjoying the festive period, which for him involves a certain popular ITV period drama.

“I’m Downton Abbey obsessed! Em would tell me about it and say I should watch it but I’d always say that period drama isn’t my thing. But one day I sat down to watch it and wow…That was it. I was hooked,” Peter reveals.

So we’re guessing that he’s looking forward to the 2013 Downton Abbey Christmas special?

As well as a new baby, Pete and Emily are all set start a new chapter in their lives, one without reality TV cameras as the filmed the final scenes of his ITV2 reality show My Life last Saturday.

After ten series, it’s no surprise to hear that the Mysterious Girl singer had a tough time saying goodbye, and an inside source told Now magazine: “He got very emotional. The show’s been a big part of his life.”

Are you sad that Peter’s reality show is no longer on the air? Tweet us @sofeminineUK!