by Emmy Griffiths Published on 20 February 2014 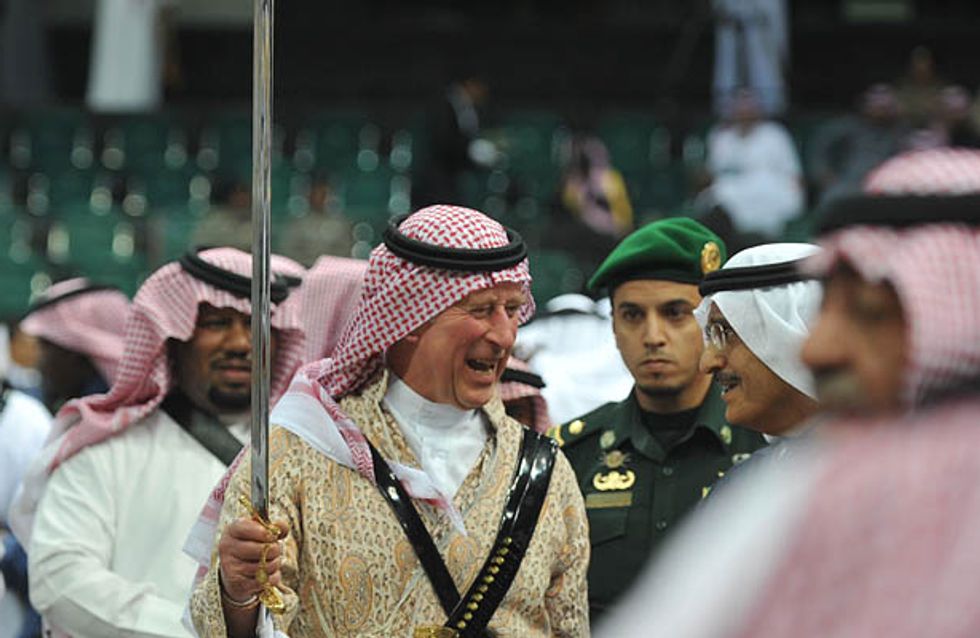 Is there anything more enjoyable than watching notoriously stiff upper lip Royalty forced out of their comfort zones? This was a rhetorical question, because the answer is no. No, there is nothing more enjoyable. On this particular occasion, Price Charles is dressed in traditional garb and danced the Ardah, a sword dance, along with the royal Saudi family.

Prince Charles has been busting all kinds of moves, and we’re loving it. Looking good Charlie!

Of course, this isn’t the only time that the Royal family has been totally hilariously awkward. We also had Prince William’s amazing rendition of Living on a Prayer with Bon Jovi and Taylor Swift…

Let’s not even mention The Queen’s horrifically awkward encounter with Gary Barlow, in which she pointed out that a massive party Gary had planned in the Queen’s back garden would keep her family up all night.

He said: “The first thing [The Queen] asked me was ‘What time does the concert finish?’ I said ‘Ohh about half 10 your Majesty’ she said, ‘How long does it take to take down all the equipment then?’ I thought ohh this is not a good question, I said ‘About seven hours’ and she said ‘So they’re going to be taking it down all through the night, so all my family who live at the front of the palace there are going to be kept awake all night?’, I said ‘Yeah’. It was really awkward!"

Ah dear. Please let us also pay tribute to Prince Philip and his uncanny ability to create awkward situations in every room he enters with his unbelievably amazing quotes.

Classics include: At Hartfordshire University, he said: “During the Blitz, a lot of shops had their windows blown in and put up notices saying, ‘More open than usual.’ I now declare this place more open than usual”, and to the then Paraguay dictator General Stroessner: “it’s a pleasure to be in a country that isn’t ruled by its people.”

We’re also not sure any of the Royals were quite as embarrassed as William was when Tinie Tempah high fived him. Look at his sheepish face!