Prince Harry and Cressida Bonas avoid each other at charity event

Prince Harry and Cressida Bonas have always been shy about their romance. The pair have been dating for a while now but are determined to ensure their relationship is for their eyes only. Perhaps taking a lesson from his brother and Kate Middleton - who seem unable to escape the cameras - Harry seems to be doing all he can to protect Cressida.

Prince Harry and Cressida Bonas both attended the Boodles Boxing Ball at the weekend.

But the couple, who have been dating for a year, did everything they could not to be seen together.

He arrived alone in a car, while Cressida entered the bash through the back door.

She looked stunning in a black gown with thigh and cleavage split, her hair worn loose and her look completed with black strappy heels.

The young ski instructor and dance student left without her boyfriend and instead made her exit with his cousin and her close friend, Princess Eugenie.

Cressida, 24, kept her head down in the car, keen to be as low-key as possible. 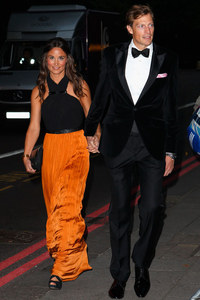 While Cressida and Harry wanted to keep their romance private, Princess Eugenie was happy to pose with boyfriend Jack Brooksbank.

And her sister Beatrice cuddled up to the cameras with her man Dave Clark.​

Pippa Middleton and her boyfriend Nico Jackson were guests of honour at the ball.

Kate Middleton's little sister chose an orange and black halter-neck dress for the event, which she teamed with a black clutch and gold bangle.

Her look was completed with natural make up and loosely waved hair.

Pregnant Zara Phillips also made an appearance with husband Mike Tindall, her baby belly on full show in a blue silk dress.

Kate Middleton and Prince William have attended the ball in previous years but we expect this year they decided to stay at home with baby George.

This was probably a good thing, as things could've been awkward between the Duchess and Cressida.

Recent reports have claimed Kate may not be happy with rumours that Harry is set to propose to his girlfriend.

Although Kate has no problem with Cressida - she is well loved by the royal family - the new mum is apparently not so keen on her half-sister.

Isabella Calthorpe, the relation in question, has had connections to various members of the royal family for some time.

One member in particular: Prince William.

Wills apparently look a shine to Isabella during his brief split from Kate in 2007 - but she didn't return his affections.​

A friend told The Telegraph: "Cressida has said Kate is not keen on her relationship with Harry.

"Cressie and Isabella could not be closer. Where she goes, Bella goes.

"Kate does not like Isabella because William loved her, and that caused their break-up."

It looks like Kate may have no choice but to accept the prospect of Cressida joining the royal family, as Harry is apparently all set to propose.

A source told the Daily Star: "He is taking a lot of time and trouble to devote so much time to her and see her as often as he can. This romance is different.