Cressida Bonas had a small role in an eyebrow-raising show called Trinity, about college girls who offer sexual favours in exchange for votes.

She can be seen as part of the Wonder Woman-clad gang, then in another scene, the group goes into a room full of young men where they offer some sexy times in exchange for the guys’ votes.

She bagged the role as her half-sister, Isabella Calthorpe, played the lead character.

However, Cressida’s acting(?!) career was over rather quickly when the show, which was hyped up as the UK’s answer to Gossip Girl, was cancelled after only one season.

The incident is surely only a royally embarrassing memory to the 24-year-old now, who is reportedly inching closer to Kate Middleton status amidst rumours of a royal proposal from Harry.

Radar reported: “Harry is very close to Cressida, in fact she was one of the first people he wanted to see when he came back from Afghanistan.”

“He missed her when he was overseas and started thinking she was someone he could settle down with.”

The source also told Radar: “He may well have found his princess.”

What do you think of Cressida’s cheeky role? Tweet us @SofeminineUK 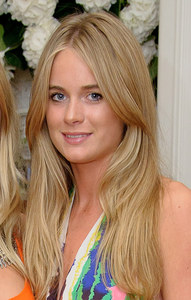