Apparently Rihanna is furious with Beyonce, and to be honest, it sort of makes sense. They are both super powerful, successful divas with more hit singles and awards than they can count, and so it stands to reason that there would be some competition between the two of them. But now it sounds like RiRi is especially annoyed over Beyonce’s surprise album, as it has clashed with her own new tune release.

The world roared in shock and delight when Beyonce launched a surprise album last week, but apparently there was one grouch who was less-than-impressed by the revelation.

According to MediaTakeout, Rihanna was not happy with Beyonce’s shock release of her entire new album along with 17 sneak peeks to her videos – in which she looks like she is absolutely killing it in all of them – as Rihanna was due to release her and Eminem’s new single The Monster last week and felt that it was overshadowed by Beyonce’s move. 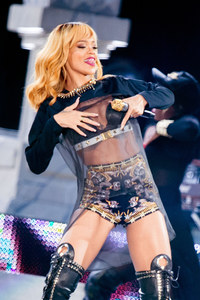 According to sources, apparently the We Found Love singer wasn’t too happy with the timing at all. It would be quite frustrating - whilst she was building up to the spectacular introduction of her new single, all Queen B needed to do was quietly release absolutely everything with zero marketing and still everyone went utterly cray cray.

An insider revealed: “Rihanna and Beyonce have always had a very cordial [relationship], but they are definitely competitors. I think Beyonce is JEALOUS of Rihanna.

“First there were those Jay Z rumours, and lately people are acting like Rihanna [is] the top girl in the game. . . . [I think] Beyonce definitely pulled a power play and let Rihanna know who the Queen is."

She certainly did. We love you, B. Apparently the Umbrella singer was so annoyed that she even rang up her management, who also represent Beyonce, to voice her anger.

It sounds bad, but Gossip Cop has reported that a source close to Beyonce has: "Laughed off the allegations, saying speculation that her album release had anything to do with Rihanna is ridiculous", so perhaps they aren't totally against each other!

Also, since Ri and Eminem’s new single is so good, it doesn’t matter about the competition!

Do you think the two get along? Tweet us @sofeminineUK