Robert Pattinson reveals what he finds most attractive in a woman

It’s a spritzing frenzy in the Sofeminine office today! If anyone knows how to win the affections of Robert Pattinson then us girls are more than ready to listen. Luckily for us, he recently revealed what he finds most attractive in a woman and that my friends, is her sense of smell.

What’s the way to Robert Pattinson’s heart? We know!

Robert Pattinson revealed during an interview with Portuguese magazine Activa what attracts him most to the opposite sex and for him, it’s all about the way a woman smells.

And before you go perfume shopping mad, it’s not necessarily fragrance he’s talking about either.

He said: “It doesn’t necessarily have to be perfume.

“I like the smell of people. It is really strange and I’m sure it has to do with pheromones."

He continued: “We like people because subconsciously we like the way they smell. I always find this very interesting to observe."

On the subject, why not remind ourselves of R-Pattz in his sexy Dior Homme commercial...

The strange fetish isn’t the only way to the heartthrob's heart though, he also appreciates a woman who is comfortable in her own skin.

In an interview with Harper’s Bazaar Arabia the Twilight Saga actor admitted: "I guess because it's the opposite of what I am—I am so all over the place.

"If someone looks good in their clothes, it's because they are comfortable in their own skin," he explains. "It's literally just like owning it. Oh no! That is so lame, I feel like I am on Project Runway saying ‘own that.'"

As if we weren't massive Rob fans already, his new film is getting us all kinds of excited.

The actor is currently buffing up for his new flick Mission: Blacklist, where he’s set to play a military interrogator who helps capture Saddam Hussein. Talk about seeing the former Twilight vamp in a totally different light!

We’ve got one question we're dying to ask Rob - What’s your favorite scent? 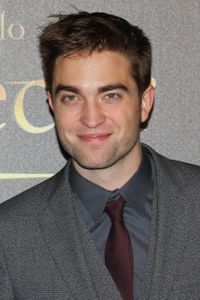