Despite becoming part of the most talked about awards performance of the year, due to the twerking antics of his duet partner, Robin Thicke has shot down the possibility of taking the stage with Miley Cyrus again in the future. The two of them performed Miley’s We Can’t Stop along with Robin’s Blurred Lines as Miley - dressed in nothing but a skin coloured latex bikini and wearing a foam finger - grinded up against the singer.

Robin Thicke has ruled out the possibility of another performance with Miley Cyrus.

Since washing his hands of Miley’s twerking actions during an interview in September, the Blurred Lines singer has now gone on to say that he won’t perform with her again.

Whilst on Alan Carr’s Chatty Man, he answers Alan’s question about reports that he and Miley will be performing together again, saying: “Oh no, no no no. No no, definitely no, definitely not.”

The interview, which will appear on television tonight, also includes the crooner talking about how he didn’t look at Miley as a sex object…as she pressed up against his groin…saying: “I never, I never looked at her – that would have been rude. I looked in her eyes, it was all about heart.”

Sure Robin, and those models appeared almost completely naked in their music video because you wanted to feel at one with nature?

He will also admit he didn’t realise what Miley would be wearing, saying: “She didn’t wear that outfit in rehearsals, so it never seemed as bad, it seemed more playful. And to us, there was no sexuality between us, it was all silliness and fun – it was like throwing a party at your house and being silly."

“But I understand how […] it might have offended some people, and especially because she – everyone knows her as Hannah Montana. It would have been different if it was Rihanna or a different girl, you know what I mean, but the fact that it was Hannah Montana, becoming a woman and doing it the way she wanted to do it.”

However, it appears that Miley’s VMA antics are the last thing on her mind at the moment, as reports have surfaced that the Wrecking Ball singer may want ex-fiance Liam Hemsworth back.

An insider revealed: “The random hook-ups happen when she’s been partying. She’s trying to get over Liam and her coping skills are not the greatest so she’s partying the pain away.”

They continued to say: “She’s still very hung up on him but she’s not writing him letters begging for him back. The worst she’s done is call him late at night when she gets emotional.

"She’s in a lot of pain still over this breakup so she’s had a few weak moments but she always regrets it the next day.”

Do you think Robin should perform with Miley again? Tweet us @Sofeminineuk 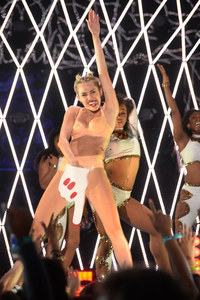