We know that it was Russell Brand who wanted to call his marriage to Katy Perry a day – seriously, all you need to do is start listening to Katy’s new album Prism to be fully informed on the break up – and after the comedian sat down for a chat on The Jonathan Ross Show, he seriously praised his new girlfriend, saying he’d never felt this way before. Ouch KP. Ouch.

Russell Brand has chatted about his new relationship with Jemima Khan, and threw in a subtle diss at his marriage with Katy Perry in the process. Poor Perry, hopefully she won’t see it!

Russell was known for his lothario ways before settling down to marriage with the mega pop star, but their wedded bliss was short lived and ended in December 2011 after only 14 months of marriage. However, apparently Russell hasn’t gone back to his womanising ways, and he gushed about his new girlfriend. He even brought her white Alsation dog Brian along to the interview. 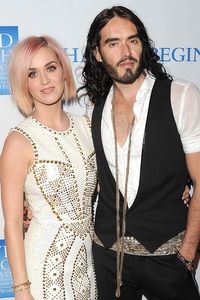 Speaking of their relationship, he revealed to his good friend Jonathan Ross: “I really love her…I’m going to be really kind in this relationship. I haven’t been out there trying to nail everyone.”

Well that’s good…when Jonathan joked about what he was going to do about parting ways with Brian the dog if he and Jemima ever broke up, the comedian retorted: “Don’t say that mate, I really love her! That would hurt my little heart.”

He carried on talking about his new relationship, and pretty much dissed his marriage to the Fireworks singer in the process as he said: ‘I'm very, very happy in a relationship that feels very different from anything I’ve experienced before. I feel like its grounded in friendship and a sort of love and it’s all well cool and exciting and stuff, but it feels different for me.

But Katy Perry was the top crumpet Russell! The very top! We still don’t know what he was thinking divorcing her! It’s nice that he’s found happiness though, along with a new inner calm that has come from meditating. The Get Him to the Greek star told Wossy: “I’ve been meditating and thinking about spiritual stuff and I feel very, very relaxed now. As a result of that I think I’ve magnetised more positive things towards me.”

That sounds perfectly reasonable and not weird at all!

Do you think Russell treated Katy right? Tweet us @sofeminineUK