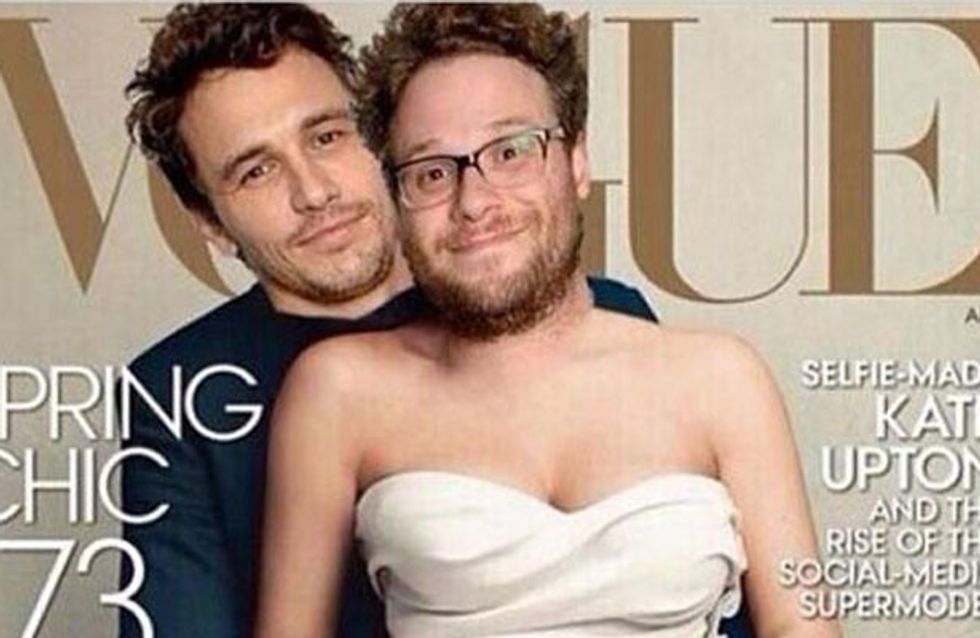 While Vogue continues to get backlash for putting the seemingly "unworthy" Kim Kardashian and fiancé Kanye West on their April cover, the world continues to turn in a hysterical manner. Spoofs of the cover image are already pouring in, most notably from Seth Rogan and James Franco who share a warm embrace for the camera. Hey, they say any press is good press, right?

The internet practically exploded when Vogue revealed Kim Kardashian and Kanye West as their April 2014 cover stars. From fans to celebrities, everyone was pretty much left in awe. While some folks deemed Kim as being unfit for the prestigious fashion glossy, others chose to take the more comedic route; making light of the matter.

Cue the ridiculously funny James Franco and Seth Rogan. Taking full advantage of the hot topic, the pair decided to have their heads photoshopped onto the original image, replacing Kimye. "It had to be done," Seth Tweeted. "Seth! I love you, dog!" James added along with the photo on Instagram.

We have to admit, they certainly got a laugh out of us.

Since we can't get enough, check out some of our favorite Kimye spoofs.

Miss Piggy and Kermit on 'Vague'

What's air? We couldn't breathe from laughing so hard when Miss Piggy uploaded this image to Facebook complete with the caption, "Kermie and Moi are honored to be featured on the cover of Vague as the #UniversesMostTalkedAboutCouple!! (Are you surprised, though?)"

We were all left scratching our heads when Kanye debuted his Bound 2 video featuring a naked Kim straddling him on a bike. Luckily Seth and James came to the rescue with their spot on recreation.

Jeez, we love these two!

South Park has Kanye explain why Kim's not a hobbit

Okay, maybe it's a little mean to make fun of a pregnant lady. However, it didn't stop the folks of the internet from comparing Kim's dress to a couch and Mrs. Doubtfire's floral frock with matching jacket.

The question still remains: who wore it best?

What are some of your favorite Kim Kardashian and Kanye West spoofs? Tweet us @sofeminineUK!