Model Cara Delevingne is hoping to move out of the fashion world and into movies. The young star has already voiced her hopes to become an actress and is reported to have recently auditioned for the much hyped Fifty Shades Of Grey.

Cara Delevingne is working to get her foot firmly in the acting door.

The model of the moment has reportedly made efforts to land a role in upcoming flick Fifty Shades Of Grey.

Working in the fashion industry, Cara will have no trouble being in various states of undress - add to that her friendship with Rihanna and she's all set for the S&M romp!

According to The Sun she auditioned for a "secondary part" in the film, which is an adaption of E.L. James' hit book.

The popular star is reportedly making the most of her connections with director Sam Taylor-Johnson.

A source told The Sun: "Cara is a global icon now and a good actress as well and Sam wants her in the movie - though which part exactly hasn’t been established.

“Her sisters know Sam and it’s all a close English public school clique, so she’s well-placed for a decent role."

It was in fact Anna Karenina director Joe Wright who first told Cara of this part.

A source said: “Cara is a front-runner... She’s desperate to get the gig and has always said that she wanted to be taken seriously as an actress.

“She loved her small role in Anna Karenina with Keira Knightley last year - so she jumped at the chance to audition.” 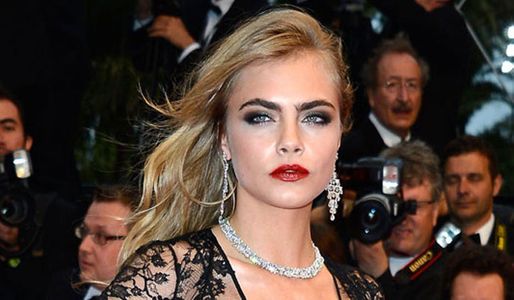 And Cara needn't necessarily worry about landing the particular part she's auditioned for.

The insider explained: “Her agent has also been talking to Kelly Marcel, the screenplay writer and, if needs be, a strong role will be written in for her.”

The 20-year-old has made no secret of wanting to move into acting - in an interview with the Daily Star she spoke of some pretty big dreams.

She admitted: “I would love to be doing what Meryl Streep is doing. Her career has been incredible. Or Judy Dench.

"Charlize Theron is another one. She started off as a model and she is one of the most beautiful women, Amazonian goddess looking.

“She did a movie, Monster, and plays a real thug, plays really ugly, and I absolutely love that.

“That’s what I want to be - a crazy cave woman or a possessed demon child.

“Ugly is the most beautiful. I want to do that.”

Cara continued: “Scorsese, Tarantino, Spielberg, Peter Jackson, I’m here, I’m ready. I can do funny faces, I can sing, I can dance. Hire me!”