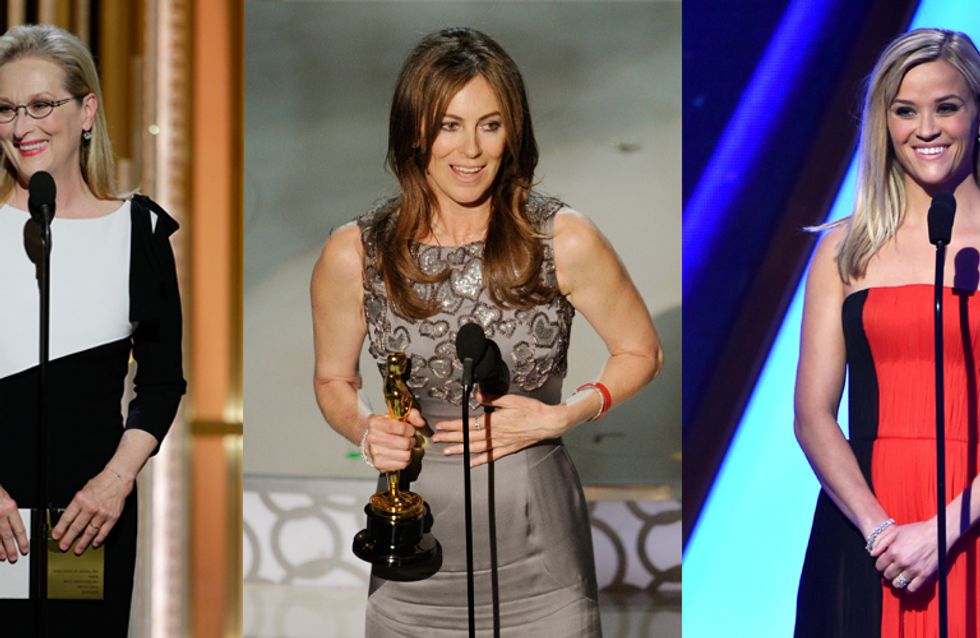 It turns out that being a female in the film industry is about as popular as being a Justin Bieber fan over the age of 40. You would think given that there is a Best Actor AND Best Actress categories at the Oscars, there would be just as many males and females given the chance to shine on the silver screen. Au contraire! Here is a little taste of how Hollywood has proven itself sexist to women on and off camera for the past two decades.

You may or may not have heard of small-time, struggling actresses like Reese Witherspoon and Meryl Streep. Well, these two dynamite ladies have decided to use their money for the forces of good: producing scripts and films exclusively for movies with female leads and screenwriters. Reese's production company, Pacific Standard, produced female dominated films like Gone Girl and Wild, and is about to release Reese's newest film Hot Pursuit alongside the highest paid actress on TV and total bombshell Sofia Vergara. Reese told Variety Magazine that she was inspired to start the production company after she realised there were no good projects for women over 30: “I think it was literally one studio that had a project for a female lead over 30, and I thought to myself, ‘I’ve got to get busy.’" I am using this to excuse Reese from starring in brutal films like This Means War, How Do You Know, and Four Christmases, she didn't have a choice! Although Reese's struggle to find a decent job makes me feel infinitely better about my time spent unemployed last year, the fact that Academy Award winning Reese Witherspoon had trouble finding work just makes zero sense.

Record-setting Oscar winner Meryl Streep followed suit with her newest investment in a screenwriting lab backed by interested women filmmakers, New York Women in Film and Television, and IRIS. The lab seeks not just to make films with a female lead, but fights ageism by writing scripts with a female lead over 40, or as they like to call it in Hollywood, WAY over the hill. The lab also focuses on the space with the largest gender gap in Hollywood: the lack of women behind the camera. Sure, you can name hundreds of A-list actresses, but how many successful female screenwriters can you name? How about female producers? Unless you don't have a day job and thus enjoy stalking IMDB in your free time, my guess is going to be zero.

If your favourite day comes twice a month and involves a check from your boss, then you may still be confused as to what Reese Witherspoon and Meryl Streep have to complain about. However, here are some statistics that ought to remind you that even at the highest of social ladders, the gender gap is still alive and well.

Since the Centre for the Study of Women in Television and Film has been collecting data, which goes back 17 years, only 7% of the best performing films have been directed by women. SEVEN?! You are about as likely to die of a stroke as you are to see one of the highest grossing films of your generation directed by a woman. Not to rub salt in the gender gap wound, but the number of females who directed the top 250 grossing films have actually decreased by 2% in the past 17 years. I am pretty sure that is the opposite of progress. The only woman to ever win a directing Oscar? Kathryn Bigelow in 2010 for Hurt Locker, which was an extra sweet win because she beat out ex-husband and notorious douche bag James Cameron's Avatar. Which we would like to kindly remind you was basically a rip-off of Fern Gully.

As a female writer, I find this more depressing then when I found out Blake Lively had gotten a nose job. Aren't we constantly making fun of how men hate paying attention to detail and never seem to understand what a woman is thinking? Then how on earth are they making up almost 90% of the writing we've seen in the best films of the past seventeen years? I don't trust a man to remember to put the toilet seat down or send me an ecard on my birthday, why should I leave something as important as writing the best movies of our time in their hands?

This little statistic means that more than half of the films in the past 17 years have basically been a total sausage fest on set. No female directors, writers, producers, cinematographers or leading characters. ZERO. Sounds like a lot of fantasy football talk and ball scratching to me. It doesn't just stop there, the odds having more than 10 women in instrumental roles for a successful movie? 3%. That means you have about the same odds of being in prison as you do being on a Hollywood movie set with enough girls to fill a netball team.

Of the top 100 movies of 2013, it was more likely that you were a person that had NEVER used the Internet than to have a movie with a female in the leading role. I repeat, NEVER used the Internet. Also, women accounted for only 30% of all speaking characters in 2013. Let's just take a trip down memory lane to remember some of the record-setting films of 2013: The Hunger Games: Catching Fire, Frozen, and Gravity all of which featured female leads, so let's not act like movie goers don't enjoy seeing a girl at the helm. Also released in 2013? American Hustle, which was later revealed to be paying the female leads Jennifer Lawrence and Amy Adams significantly less than their male counterparts. Even though the female duo had comparable screen time and more Oscar nominations AND wins than their three male co-stars combined.

Only 1% of movie composers of top grossing films were women

I challenge you to think of an award-winning female composer? You can't, and that's probably because only 1% of the best films since the late 90's was credited with a female composer. It's not just the composers, only 5% of acting and supervising sound designers were women. Do men have a better ear than women? Given that my ex boyfriend could NEVER remember anything important that I used to say, I sincerely doubt that's the case.

So you may be thinking to yourself, well we may not be where we need to be, but at least we've made progress on the gender gap, right? WRONG. The number of female writers, editors and producers is actually WORSE today than it was in 1998. Which means that almost nothing has changed for the gender gap in Hollywood since pre-clubbing Lindsay Lohan played adorable twins, Adam Sandler made movies we could actually watch, and Kate lied and told Jack she would never let go.

Okay, so maybe you're thinking that women just don't like the movie business, or they don't feel like getting out of their sweatpants and going to the movie theater? Wrong again. Studies show that women make up almost half of all film students in the USA, and we all know there are plenty of women trying to get on-camera roles that have never attended film school before. How else do you think Starbucks has endless amounts of baristas in LA? Also, why would we allow men to dominate an industry that is consumed equally by men and women? Women continuously represent about half of the movie-going population (I don't doubt that for a second, have you seen the bathroom lines?) even for more testosterone inspired films like 22 Jump Street and Neighbors.

So when people give a wealthy and award-winning woman like Meryl Streep grief for talking up the gender gap and the level of ageism in Hollywood, I implore them to sack up and remember that even though people lie, statistics don't. Let's hope that we see some major change in roles behind the camera so that we start to see more fine females getting to carve out their piece of the Hollywood pie.

Do these statistics shock you? Tweet at us! @sofeminineUK

20 Things You Should Never Do In Your Thirties

Monday To Friday Feminism: How To F Up Your Week