by Emma Goddard Published on 8 March 2015 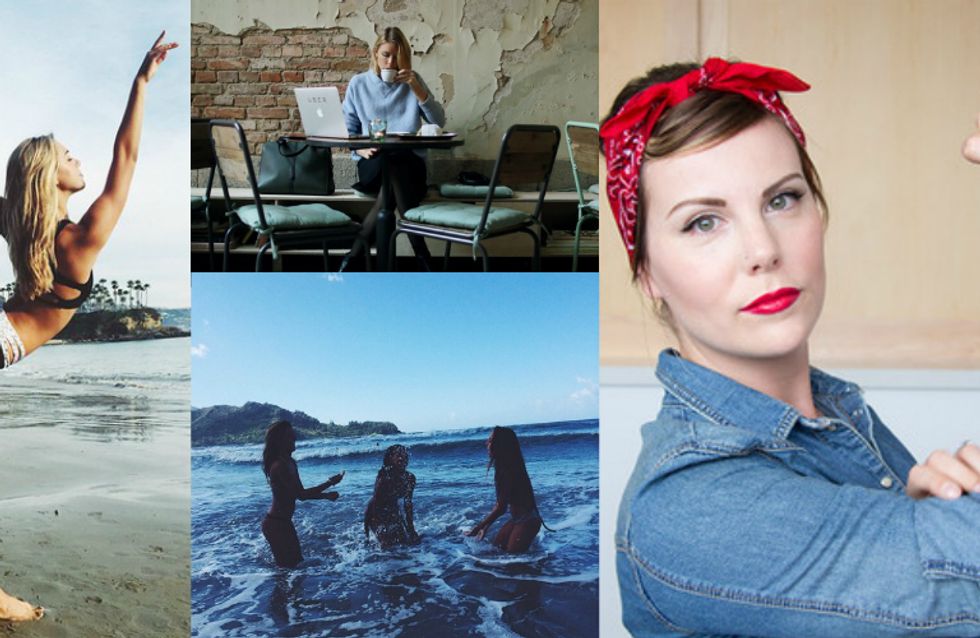 #Sorrynotsorry to all you gents out there, but being a female is kick-ass. There's really no debating it. We're mothers, leaders, CEOs, sisters, soldiers, caretakers, daughters, and everything else you could ever imagine. Basically, we're the sh*t, and in the wise words of Beyonce, "Who run the world? Girls." So without further ado, here are some of the most amazing things about being a woman. Happy International Woman's Day!

1. We can have babies

Even with the horrible pains of childbirth that no man will ever understand, I doubt that many women would ever give up the ability to have children. Even if those nine months aren't all fun and games, there's nothing more rewarding than being able to say, "Hey, I gave birth to that beautiful child." At least that's what I've heard from the wonderful women in my life.

2. We can associate ourselves with some pretty outstanding individuals

Gloria Steinem, Cleopatra, Joan of Arc, Jane Austen, Coco Chanel, Anna Wintour, Michelle Obama, Hillary Clinton, Queen Elizabeth II, Rosa Parks, Margaret Thatcher, Anne Frank, Malala Yousafzai, Oprah Winfrey... the list goes on and on and on. Sure, I'm not going to pretend that the world isn't full of many inspiring men as well (obviously), but it's safe to say that women everywhere have faced some tough, uphill battles to get to where men have been since the beginning of time.

3. We have a weird ability to understand each other without any context

Woman A: "Remember that time when..." Woman B: "Ugh yeah, what a nightmare." Ladies, I know you've all experienced this before. Whether with my mum or my friends, I've had numerous conversations with other women where I've brought up a completely random subject with barely any background information, and they've known exactly what I was talking about. It's not like, "Oh did you see the llamas?" and they respond with "Oh the ones that escaped?" but more like "Did you see the?" and "Oh my God those llamas that escaped?!" We're mind readers.

4. Women are more likely to graduate

We might still be working on that wage gap (and trust us, we'll keep fighting for equality as long as we live), but a 2014 study from the White House Council of Economic Advisers reported that more women are likely to graduate college and attend graduate school than men. Boom. But with that said, I still do support everyone being able to receive an education.

5. We can wear heels

Dudes can wear heels too but I don't know how many people would be into it. I do feel bad about it though... like can someone find platforms for men and somehow make it more socially acceptable? All I know is that being short like I am, heels are the ultimate lifesaver, especially since I'm 5'1 and my boyfriend is 6'0. Plus, wearing heels can make a girl's legs look amazing so there's also that.

Sorry, men, but according to a report released by the Centres for Disease Control and Prevention in 2014, a girl born in 2012 is likely to live five years longer than a boy also born in 2012. Why? Well, females are allegedly tougher in utero, less likely to take risks that could lead to death, we succumb to heart disease later in life, we have stronger social networks, and we also generally take better care of our health, according to an interview published by ABC News.

7. Females are better at communicating

I mean I probably could've told you this, but studies have shown that women are better at communicating with others and that they generally talk more than men do. I'm not surprised really. I mean have you seen drunk girls talk to each other in a bathroom? We're basically best friends by the end of the conversation.

OK, so I know this is just a natural thing considering we do give birth and have maternal instincts, but whether she knows you or not, a woman is more likely to take you under her wing if you need a helping hand. Seriously, if you need a mentor, someone to sit with at lunch, or merely someone to vent to, we've got your back. Really though, we have some of the best shoulders to cry on ever!

9. Our clothing & accessory options are endless

I've always found it funny when I walk into a department store and see that 2/3 of it is dedicated to women's clothing and accessories while the last third of it is stocked with men's clothing, if that. Unless you're in a store that's purely meant for menswear then you're probably going to have a pretty limited selection of clothing being a guy. Let's be real though: women's clothes are so much cooler than men's; there's just much more variation. Sucks to be a man.

10. Basically every earth-related God ever is a woman

You've heard of Demeter and Gaea in your mythology classes, right? While they might be the two most recognisable, there are actually many other earth goddesses representative of things like the harvest, nature and wildlife, and the fertility of the earth. Obviously we'll never know the reasoning behind this Greek myth and why the individual(s) behind them decided that the protector of earth would be a woman.

11. We're in touch with our emotions

Sometimes I just want to grab men by the shoulders and just be like, "Tell me how you really feel, dammit!" Guys might say we overthink things, but that wouldn't happen so much if they would just be direct and tell us what's on their minds.

12. We're the best multi-taskers ever

13. Artists are inspired by us

Sure there are many works of art inspired by men too, but you'd be a filthy liar if you said the male body was more pleasing to the eye than a woman's. I mean Georgia O'Keeffe painted our vaginas into beautiful flowers, and that's saying something. I don't even want to imagine what her paintings would have looked like if she had used male symbolism. However I can guess that they probably wouldn't have looked as beautiful.

14. Dying our hair is a completely normal thing

If a man dyes his hair it probably looks really weird. I'm not saying they can't, but I think after the 90s with men attempting to make frosted tips a thing, they should leave the hair dying to us. Remember that one episode of "Downton Abbey" when Molesley tried to dye his hair and it just ended up way too black? Awkward. Women are lucky because we can dye our hair whatever the hell colour we want to and it still looks stunning and, usually, natural. But even Hayley Williams of Parmore can rock a neon look better than any guy could.

15. Some of the coolest fictional characters are female

Nancy Drew, anyone? What about Carrie Bradshaw, Hermione Granger, Matilda, Black Widow, Elizabeth Bennett or Scout Finch? I could list so many women but that would take years. They're all so fricken cool! As a woman I'm extremely proud to have such fictional individuals represent my gender.

I'm not sure why we even debate this anymore and I know every guy ever says it's not true, but we've all seen the studies y'all. Not to mention an Army report recently revealed that when it comes to Army helicopter pilots, "women may operate aircraft more safely."

17. Shania Twain wrote a song about Iit so it's obviously true

What else do you love about being a woman? Tweet us @sofeminineUK!