The heartbreak diet is pretty common, but if you’re an A-list film star like Kristen Stewart you can’t bring your personal life problems to work with you. The Twilight actress learnt this the hard way after she was reportedly ordered to gain weight for her new movie after showing up for filming looking skinny and depressed.

Most Hollywood stars are told to watch their weight while filming, but Kristen Stewart had the opposite problem while filming new movie Sils Maria recently in Europe.

Still reeling from the breakdown of her four-year relationship with her former Twilight co-star Robert Pattinson in May, Kristen lost her appetite and her slender body shrunk even further.

But her director Olivier Assayas wanted the On The Road actress to look "dowdy and puffy" for her appearance in the movie, according to a Yahoo OMG source.

Not wanting to lose her part in the film, the insider claims that Kristen started gorging on chocolate in order to fill out her tiny frame in time for the summer shoot.

There was no chance of hiding her body as one scene in Sils Maria required the 23 year-old to strip off to her underwear and jump into a chilly Swiss lake alongside her topless co-star Juliette Binoche.

Images of the incident were posted to the MailOnline, where despite the cold temperatures and embarrassment at stripping off, Kristen looked healthy and happy, laughing along with the cast and crew as they filmed the shot.

Earlier this summer the Snow White and the Huntsman star spoke to Women’s Wear Daily about the upcoming movie.

"I play a personal assistant to an actress," she revealed. "It takes two very particular people to have that relationship be functional - one that services the other - because Juliette Binoche is playing the actress that I assist, and she is one of the most powerful women I think I’ve ever seen in film."

This isn’t the first time that Kristen has had to shed her clothes for a role.

Sils Maria looks to be much less raunchy, although while filming the lake scene Kristen took the plunge in a white see-through pair of men’s boxers, with only a tiny black thong protecting her dignity - eeek!

Do you think it’s unfair that Kristen was ordered to gain weight? Tweet us @SofeminineUK! 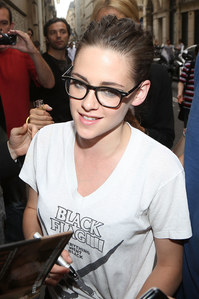 Alison Potter
…
weight
From hair ideas to outifts, look no further for your daily inspiration