X Factor started last weekend, so of course it's now time for BBC rival Strictly Come Dancing to kick off! The final line-up has finally been revealed after weeks of speculation, ahead of the show's first episode on Saturday at 6.50pm on BBC One. What do you think of this year's celebs?

The full line-up for this year's Strictly Come Dancing has been confirmed.

Fresh from their ratings hit last year, the BBC has revealed the names of the 15 celebrities who will be battling it out for the much-coveted Glitterball trophy.

But who will be taking home the Strictly title this year?

Abbey Clancey is crowned the winner of Strictly Come Dancing 2013
Abbey Clancey was announced as the winner of Strictly Come Dancing last night, defying the odds after being the third favourite to win the show. There can only be one person to hoist up the glitterball trophy, and the other contestants - Natalie Gumede and Susanna Reid – were the runners up after missing out on the top spot, with Sophie Ellis-Bextor finishing in fourth place, though it sounds like the girls had an amazing time win or lose! 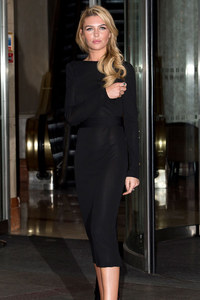 Model and TV presenter Abbey Clancy first shot to fame as a contestant on 2006 series Britain's Next Top Model.

Abbey is married to footballer Peter Crouch and they have a young daughter, Sophia. She has a regular fashion slot on ITV's This Morning.

Abbey says of her Strictly experience: "It’s a once in a lifetime opportunity. You can’t buy this experience, and to hopefully come out of it with a new skill would be great."

Ashley Taylor Dawson is one of the longest serving cast members on Hollyoaks. Before he played Darren Osborne in the soap, he was a member of fail pop group allSTARS* in 2001 - so perhaps he's got some moves up his sleeve?

Ashley says: "I never in my wildest dreams thought I would be part of Strictly Come Dancing. It’s an amazing discipline to learn, the whole experience is just going to be fantastic."

Susanna Reid is more used to being the face of weekday mornings than Saturday evenings. The journalist and presenter has worked on BBC Breakfast since 2003.

She says: "I have always loved Strictly. BBC Breakfast presenters have done so well so when the opportunity came up I grabbed it with both hands."

Rugby World Cup champion Ben Cohen MBE is the 10th-highest point scorer in England rugby history. In 2011 he retired from the sport to concentrate on his charitable foundation, which combats bullying and homophobia.

Ben says: "For me it’s all about the mental side of it. The physical side is going to be tough but I don’t think that’s really going to be my biggest problem. The psychological side for me is what will win or lose me that dance, and that’s leaving everything at the door."

TV star Vanessa Feltz kicked off her career as a journalist after graduating from Cambridge University. She now has a weekly column in the Daily Express and presents a show on Radio 2.

Vanessa says: "I am about to be a grandmother for the very first time and thought it would be wonderful to acquire a new skill at this advanced age, and it would be lovely to dance with a new baby."

Fashion designer Julien Macdonald is famed for his show-stopping glamour dresses and his sharp tongue as a judge on Britain's Next Top Model.

Julien says: "You’ve only got one life. It’s an amazing opportunity - the journey, the people you will meet, the fact viewers will get to see my personality and the funny side of me. I will be able to dance hopefully by the end of it – and that’s why I’ve ended up doing Strictly."

Sophie Ellis-Bextor is a multi-platinum singer/songwriter, model and DJ. In the early 2000s she achieved widespread success with singles including Groovjet (If This Ain't Love) and Murder On The Dancefloor.

Sophie says: "I’m a big believer in serendipity. At this point in my life I feel like I can really enjoy this and I don’t have any fear about looking daft, so I’ll just go for it!"

Mark Benton is best known for his roles in ITV’s Northern Lights, BBC One drama Land Girls and as playing maths teacher Daniel Chalk in Waterloo Road. He's currently touring the country as Edna Turnblad in the musical Hairspray.

Mark says: "I just thought it would be fun. I’ve never thought about doing one of these types of shows before, but out of all of them this is the one to do."

Oxford graduate Rachel Riley replaced Carol Vorderman as the Countdown numbers queen in 2009. In 2013, she also became co-presenter on The Gadget Show.

Rachel says: "I really like positivity, I will try hard and I will put the effort in, so if something’s going wrong, it’s not because I’m not trying. I want someone who is patient, supportive and encouraging."

Patrick Robinson plays Martin “Ash” Ashford in BBC One's medical drama series, Casualty. He joined back in 1990 and played the male nurse for six and a half years. He returned to the show in 2013.

Patrick says: "When I was very young I would say my dancing skills were like a 7 or 8.5, not bad - I could try my hand at everything. Now you are looking at a 4 or 5, so if I get anything above a 6 I will be very chuffed."

Multi-millionairess Deborah Meaden joined Dragons' Den in 2003 as one of the investors. She has several successful business ventures to her name and a reputation as a fierce no-nonsense entrepreneur.

Deborah says: "It’s an amazing opportunity and I would not be able to live with myself if I didn’t do it. I thought I would absolutely regret this more than anything if I didn’t take part."

Retired sportsman Tony Jacklin is the most successful British golfer of all time. His name hangs in the World Golf Hall Of Fame and he's won tournaments including the PGA Tour, European Tour and Senior PGA Tour.

Tony says: "I’m at the time of my life when I thought why not! I love music and I do think I’ve got a sense of rhythm. Now it’s very close I just want to get stuck into it."

Natalie Gumede may find it difficult to win over the public as she's best known as Coronation Street baddie Kirsty Soames. Her shocking domestic abuse storyline won Natalie the Best Newcomer prize at the British Soap Awards in 2012 and Villain Of The Year in 2013.

Natalie says: "I have been a huge fan since the series started really, and to be a part of it this year is such a dream for me. It’s the next step in a journey that I’m really enjoying and I never thought I would get chances like this, so I feel really lucky."

David Myers is one half of TV cooking duo the Hairy Bikers. He's fronted many popular TV series and has written a number of recipe books.

Dave says: "I’m looking for someone that will be able to teach me to dance! I am going to give it 100%, but I’ll still need someone that is patient and that has feet of steel."

Nigerian born actress Fiona Fullerton has appeared in movies, TV shows and the West End theatre productions. She starred alongside Roger Moore in 1985 James Bond film A View To A Kill and boasts a career of over 30 years.

Fiona says: "I was looking for a challenge and an adventure, and swapping my wellington boots from living in the country for a whole load of sequins is very appealing." 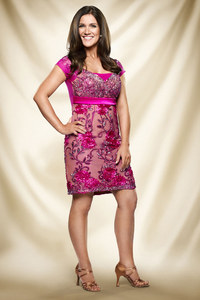