Taylor Swift and Ed Sheeran are BFFs. As well as writing songs and going on tour together, most recently the 24-year-old country music superstar was a sounding board for Ed’s highly-anticipated follow up to his debut album +, and now he’s announced that it’s finished. We can’t wait to hear the Taylor-approved new material!

Ed Sheeran has announced that his second album is now “finished”, ready for it’s scheduled release date in February 2014.

The excited British singer is clearly excited to have the follow up to his hugely successful first album completed, and to celebrate he uploaded two Instagram snaps with the team who helped him record the as-yet untitled record.

In another photo Ed teases Rick Rubin – super producer and close friend of Jay Z – writing: “Finished. And I managed to get Rick to smile in a photo.”

But it looks like there was another person who was vital in helping the redheaded musician finish his follow up – his BFF Taylor Swift.

Ed Sheeran confirms he and Ellie Goulding were dating at the VMAs
It's hard to remember anything from the VMAs other than the image of Miley Cyrus gyrating up against Robin Thicke, but there were a few other highlights that have gone by with minimal attention. One was the sight of Ed Sheeran with his hand on Ellie Goulding's leg as they held hands. She denied they were anything more than friends but now Ed has come out to set the record straight. 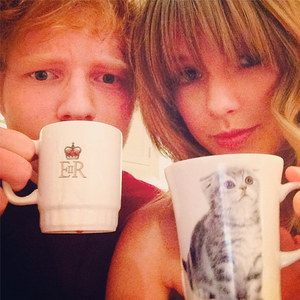 Ed told The Mirror: "Whenever I finished a song, I'd send it to [Swift] to get her opinion. She's heard all the songs and she's a good judge of what's good or not good."

The pair have been close after co-writing Taylor’s hit ‘Everything Has Changed’, and back in March 2013 Ed played 64 dates across North America as the opening act for Swift's Red Tour.

In September Ed revealed to Rolling Stone magazine: "[Taylor] treats her support acts better than anyone else I've ever been on tour with," he says. "It's [been] great."

While recording the new album over the past year, Ed reportedly spent time in Los Angeles and Nashville, Tennessee, at Taylor’s house.

That’s when he’s not been hanging out with former Friends star Courtney Cox – who has been putting him up in her beach house while he’s been recording in LA.

Gosh Ed does have a lot of famous female friends who are willing to help him out, doesn’t he?!

Are you excited for Ed’s new album? Tweet us @sofeminineUK!