The X Factor 2013 Finale line-up has been announced

It’s finally here! Everybody knows that the ITV Gods save the best performances until the big finale weekend so the question on everybody's lips is this: who will be performing this year at The X Factor 2013 finale?! We’re going to guess that you’re not going to be disappointed since it sounds like there’s a performer for everyone to enjoy watching as those precious votes are being counted for the new X Factor winner.

The famous line-up for The 2013 X Factor finale have finally been announced – and they certainly will not disappoint!

The ITV producers are calling the evening “the biggest night and music television” and they’re not wrong – as they have booked stars to ensure big numbers tune in to watch the fun.

This year The X Factor has reportedly suffered from lower ratings, with only 6.8 million viewers this week whilst BBC One rival Strictly Come Dancing pulled in 11.1 million. Could the line-up change all that? 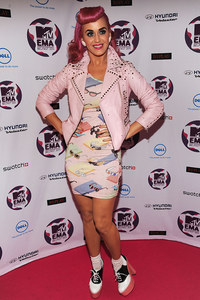 First of all, Tom Odell and The Killers will perform on the Saturday, performing classics such as Mr Brightside and Human, then on Sunday the legendary Elton John will perform his new duet Face to Face with judge Gary Barlow.

One Direction will perform their single Midnight Memories for the first time ever, and finally the one and only Katy Perry will perform her new (amazing) single Unconditionally to see us home.

Since Tamera Foster was voted off the competition last night, it looks like the X Factor crown this year is going to go to one of the semi-finalists: Nicholas McDonald, Rough Copy, Luke Friend or Sam Bailey. Even if they don't win - they're still probably going to get to meet One Direction! That should be award enough!

It sounds like the show will be seeing the X Factor finalists out with a bang, which is exactly what ITV producers have intended. An insider source told The Daily Star: “This is a big-budget finale for a series which has had its problems. The show really needs to end on a high.

“This is the end of a series which has struggled. It is traditionally the biggest night of the series and this year it is going to be huge.”