Did you hear that? It was likely Chris Hemsworth's stomach rumbling. And who could blame him? The handsome Thor star may have gained 20 pounds of muscle to play the film's superhero namesake, but he's now dropping all of that - and more - for his role in Ron Howard's highly anticipated new movie, Heart of the Sea.

Chris Hemsworth has long played the role of the broad-shouldered hunk - in the Thor installments, in The Avengers, and in Aussie soap Home and Away.

But his latest film will show him in a whole new light. Chris will play a sailor in movie Heart of the Sea who, while out on a whaling trip, has to jump ship when a whale hits and the boat sinks.

The crew fights for survival without any means to live - which explains the crash dieting. The film is based on the real life events that inspired Herman Melville to write Moby Dick.

Chris admits that his "meals" are hardly enough to keep him energised and active.

"It's funny, you've never heard 15 big, burly guys playing sailors talk about their calorie-count, what they should and shouldn't eat, what their cheat meal is going to be.

Chris actually had to lose weight for the last Ron Howard film he starred in too! He played James Hunt, a British F1 driver in the movie Rush, and was asked by the Ron to slim down from his Thor physique.

Chris says, "I went from 215 pounds from a Thor weight down to about 195 to be able to fit in. But the character that I played is about the same height and physique and also had a hard time getting in."

It sure sounds like Chris Hemsworth is doing a whole lot of body transforming for Ron Howard! We wish him a big fat (pun intended) piece of chocolate cake when the film wraps.

Will you check out Chris Hemsworth's new film? Tweet us @SofeminineUK! 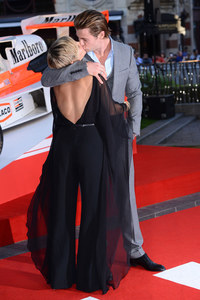 by the editorial team
+
All the news about Chris Hemsworth