Great news Tom Hardy fans! The A-list actor is about to ditch that face-covering Bane mask in favour of some rose-coloured spectacles. The Dark Knight Rises star has signed up to play Sir Elton John in the hotly anticipated biopic Rocketman. We can’t wait to see his impression of the outspoken musical legend!

We can never have too much Tom Hardy on our screens, so we’re delighted to hear that the Inception star is all set to play Sir Elton John in a biopic of the iconic singer’s life.

Entitled Rocketman, the film – which has been in the works for a couple of years now – is being made with the full co-operation of Elton John.

Set to start filming in 2014, the 66-year-old singer is even going to be an executive producer on the movie and he’s set to re-record some of his greatest hits for the feature.

Rocketman will reportedly jump around in time and take fantastical visual leaps, which seems fitting for Sir Elton (originally born as Reginald Dwight).

Tom Hardy fulfills cancer sufferer's wish with surprise lunch date
Hollywood movie star Tom Hardy has been making hearts melt for years (have you seen the photos of him with his dog?) but he's taken it to whole new level now. The actor paid a surprise visit to a 23-year-old cancer sufferer during a break in treatment.

Rocket Pictures’ Steve Hamilton Shaw is clearly made-up to have Tom onboard for the flick.

He said: “Tom is a stellar talent who will add extraordinary depth and nuance in bringing Elton’s story to life.”

“Tom is quickly becoming known as one of the world’s most versatile actors, and like others at the top of their craft, he has proven his ability to transform himself completely into the character or subject found in the material.”

The 36-year-old Londoner has had a very varied film career so far, but in recent years he’s carved out a niche playing brawny, hard-man characters in Bronson, Warrior and Lawless.

We can’t wait to see how he plays Elton! What do you think of the casting choice? Tweet us @SofeminineUK! 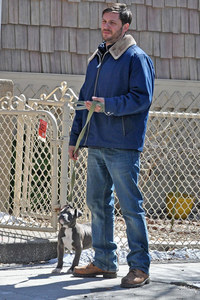