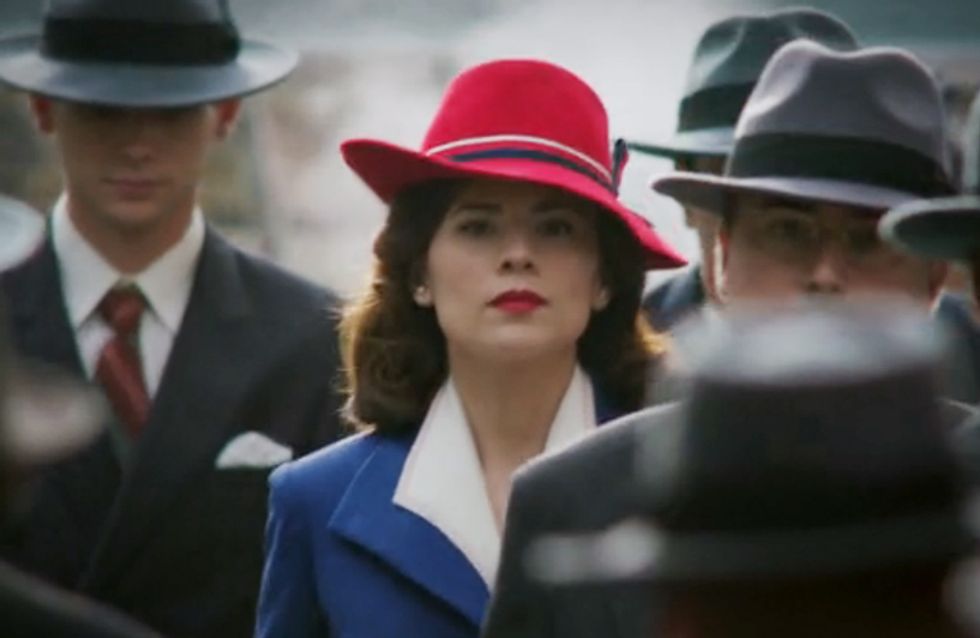 In honour of International Women's Day, here are the greatest TV heroines to look out for and why we love them!

Hannah is a self-involved, narcissistic brat, but also kind of the embodiment of everything we secretly feel bad about thinking and feeling, and we love her for it.

Top quote: “I have work, and then I have a dinner thing. And then I am busy, trying to become who I am.”

She’s a leader of the 100, a primary medic, has saved countless lives AND she’s only 16. Yeah it's fiction, but it still makes you feel bad that this weekend you watched 12 hours of House of Cards then Insta-stalked your ex, doesn't it?

Top quote: “You say having feelings makes me weak, but you’re weak for hiding from them.”

Peggy’s determination for equality between men and women in the workplace has always been what we love about her, so it’s beyond satisfying when she climbs that sexist career ladder.

Top quote: "I am the person you need to impress right now."

Olivia Pope gets sh*t DONE. No matter what the problem you know you can count on Olivia to charge in with her white coat and handle everything, no messing.

Top quote: “My gut tells me everything I need to know.”

Molly went from lusting after a totally ignorant (and cruel) Sherlock in season one to slapping him around the face for being such a dick in season three. Need we say more?

Top quote: “You should probably say thank you, actually.”

Bio-chemist/genius/eternal optimist; the SHIELD team would be nothing without goody two shoes but loveable Simmons sorting out all of their problems for them.

Top quote: “I shot a superior officer in the chest!”

Sure she’s made some mistakes but Piper has made prison her bitch by investigating a money-laundering scheme and generally being the Queen of sass.

Sybil did not give a singular sh*t about being a Lady, did she? Sneaking off to Political debates, becoming a war-time nurse, eloping with the Chauffeur AND wearing trousers to dinner (I SAY), Sybil had no problem going after what she wanted.

Top quotes: “I don’t know why we bother with corsets. Men don’t wear them, and they look perfect normal in their clothes.”

From her brother’s pawn to Daenerys Stormborn of the House Targaryen, the First of Her Name, the Unburnt, Queen of Meereen, Queen of the Andals and the Rhoynar and the First Men, Khaleesi of the Great Grass Sea, Breaker of Chains and Mother of Dragons is not a bad accomplishment over the course of four seasons.

All of the clones are cool, but Cosima HAS to be the best. A lesbian scientist with dreadlocks who works out the gang’s genetic code and faces down the terrifying institute who created them? AMAZING.

Top quote: “My sexuality is not the most interesting thing about me.”

She’s unlucky in love, can’t eat food like a normal human person and has special ‘night cheese’, so she’s basically our spirit animal with a much cooler job.

Top quote: Oh God, so many.

She is forever being dragged along on Ilana’s insane schemes whilst being not entirely stable herself (indications include lusting after her neighbour and never asking for a promotion at work). Basically Abbi is all of us.

She has zero time for ‘belonging’ to either Bill or Eric, probably since she has her own badass yet silly fairy powers of her very own and killed plenty of no good vamps in her time.

Top quote: “Go back to Hell where you came from, you f*cking dead piece of sh*t.”

Shop assistant turned Defender of the Universe, Rose was arguably The Doctor’s most badass companion.

Top quote: “If these are gonna be my last words, then you’re gonna listen; I met the Emperor. And I took the time vortex and poured into his head, and turned him to dust. Did you get that? The god of all Daleks…and I destroyed him. Ha!”

After her Adderall addiction landed her at a Community College, Annie strives to be the best at everything and cares about everything (sometimes a little too much).

Top quote: “I was so unpopular in high school, the crossing guards used to lure me into traffic.”

How can Buffy not be on the list? Regular scheduled fights with vampires, whilst juggling hot vampire boyfriends and maintaining a BFF friendship with nerd of our dreams Willow? What’s NOT to love?!

Top quote: "You have to be strong. Dawn, the hardest thing in this world-is to live in it. Be brave. Live... for me."

She went from living in her van to becoming embroiled in the murky world of SHIELD whilst trying to find out the truth about her questionable parentage and seems to take it all in her stride. Plus her hair always looks to be PERFECTION.

Top quote: "You will never see our faces but rest assures - we will rise against those who shield us from the truth."

Annalise Keating, How to Get Away with Murder

Even when her personal life is utterly falling apart and seems to give her a mental breakdown at least once per episode, Annalise is the ULTIMATE defence lawyer.

Top quote: "What you don't understand is not my concern."

Emma Swan, Once Upon A Time

She’s had a complicated, kind of rubbish life (despite being the daughter of Snow White and Prince Charming, lol), but it’s never stopped her from putting the happiness of others before herself.

Agent Carter was marketed as a one-time mini-series to fill the void that Agents of SHIELD left in their series hiatus. So why was it better than the show it was filling in for?! Two words: Peggy Carter. Working for the American Secret Service, who see her as a tea girl rather than what she really is (smarter than everyone else in the room.), Peggy turns double agent to help her friend whilst quietly mourning her dead (but not really) boyfriend Captain America.

Top quote: "I conducted my own investigation because no one listens to me. I got away with it because no one looks at me. Because, unless I have your reports, your coffee, or your lunch, I'm invisible."

What emotions do you go through during lectures? Tweet us @sofeminineUK!

20 Facts About Starting University That Everyone FAILS To Mention