Yep, It’s true! One of Hollywood’s most gorgeous and fun-loving actresses has admitted to undergoing Botox in hopes to turn back the clock and enhance her looks (without the need of surgery). But The Charlie’s Angels star was unhappy with the results revealing the cosmetic procedure left her face “in such a weird way”.

Blonde beaut, Cameron Diaz, is famous for her natural gorgeous looks and until now, was one of our fave no-needle beauties.

But it seems Cam too was sucked into Hollywood's addiction to youth. In her new lifestyle book, The Body Book, she confessed her regrets over receiving Botox treatment after it left her face “in such a weird way”.

The book in which Cameron speaks out about pubic hair, sex, skincare and fitness is her most recent literary debuts where she reportedly claims the key to “eternal youth” include nutrition, laughter, water and tons of sex!

During an interview with Entertainment Tonight Cam was asked about her involvement with Botox.

The star admitted: "I've tried it before, where it was like a little tiny touch of something.

"'It changed my face in such a weird way that I was like, 'No, I don't want to be like that' - I'd rather see my face ageing than a face that doesn't belong to me at all."

Since the disappointing procedure she’s decided to embrace her age and wrinkles admitting she'd prefer to watch herself age.

She also goes on to talk about her struggle with acne throughout her teens and career revealing her poor diet in her 20s was to blame.

Cameron talks Botox and being comfortable in her own skin.

"It was embarrassing, and I did everything I could think of to make it go away”, she said.

"I tried to cover it with makeup. I tried to get rid of it with medication: oral, topical, even the harshest prescriptions. Nothing helped for very long.

"It was really challenging to cover them up for the cameras. It was awkward and embarrassing and frustrating, and I always felt really bad about myself."

Cameron isn’t shy about exposing anything in her new tell-all book . We need to get our hands on a copy stat!

The Body Book was published on Dec. 31, 2013 (a perfect dose of inspo for fulfilling those New Year’s resolutions).

Would you ever consider getting Botox or are you taking the hint from Cameron! Tweet us @sofeminineUK 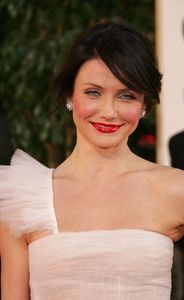