It’s been claimed that Justin Bieber is keen to get back together with his on/off girlfriend Selena Gomez.

But from the looks of a new video 20-year-old Selena has just posted online, she really doesn’t want to know.

In a not-so-subtle stab at Justin - who allegedly grew close to Victoria’s Secret model Barbara Palvin while he was still dating Selena - the former Disney star has shot a video with four of her best gal pals dancing along to Dustin Tavella’s song Everybody Knows.

The sexy clip shows the girls performing a perfectly co-ordinated routine, then breaking off to sing the lyrics to the camera. 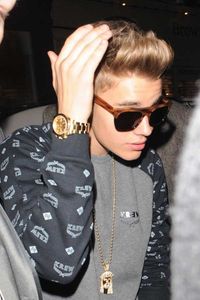 Meanwhile, Justin has been displaying some uncharacteristically strange behaviour while in London for his residency at the O2 Arena.

His time in the UK has been beset with problems - first he got into a row with a London bar after they refused him entry while out celebrating his 19th birthday, before angering legions of fans days later when he was late to his own gig.

And on Thursday night Justin collapsed on stage complaining that his lungs were hurting, with speculation mounting that his poor health is a result of his hard partying.

Justin's eventful time in the UK reached an all-time low when he was involved in an angry exchange with photographers on Friday.

A video of the incident was leaked onto the internet, in which the teen pop idol can clearly be heard shouting: “I’ll beat the f*** out of you.”

Some believe Justin and Selena's split at the end of 2012 is the real reason behind the Baby singer's UK meltdown.

It’s safe to say he’ll have a bit of a job on his hands if he does intend to win back his gorgeous ex though!

Watch Selena and her friends perform Everybody Knows: