by Emmy Griffiths Published on 4 November 2013
© Way to Blue

Tom Hiddleston loves his fans and we love him. It's one of those kinds of relationships. Therefore we take pleasure every time the Thor star dons his Loki costume in an effort to give us joy. So when we caught sight of Tom dressed as Loki whilst chilling with some kids in a classroom for a Comedy Central special, we couldn't resist taking a peek!

Tom Hiddleston, who has gained a cult following playing everyone’s favourite malevolent yet mischievous god Loki, has once again donned the Thor costume for a Comedy Central special, and it is hilarious.

The actor, who has played Loki in Thor, The Avengers Assemble and the new sequel Thor: The Dark World, sits begrudgingly in a classroom on a beanbag surrounded by kids whilst in full Asgardian garb.

“I am Loki of Asgard,” he says, magnificently.

“I’m Dianna of New Jersey!” One of the little girls yells (seriously, be prepared if you’re wearing headphones).

This isn’t the first time Tom has made a spectacle of himself for the sheer delight of his fans. We have also seen him take part in some crazy dancing in South Korea, crash this year’s Comic Con Avenger’s panel as Loki – a lot of people screamed at that one – and appeared on Sesame Street to teach the cookie monster about delayed gratification.

Tom has most recently been on a whirlwind publicity tour for Thor: The Dark World, which opened in cinemas on October 30th.

The actor has appeared in three Marvel movies to date now after his portrayal of Loki became an unexpected success - A.K.A everyone fell in love with him.

And with a sense of humour like his, who can blame them?

Are you a fan of Tom Hiddleston? Tweet us @SofeminineUK 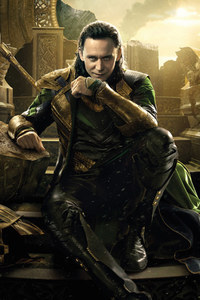