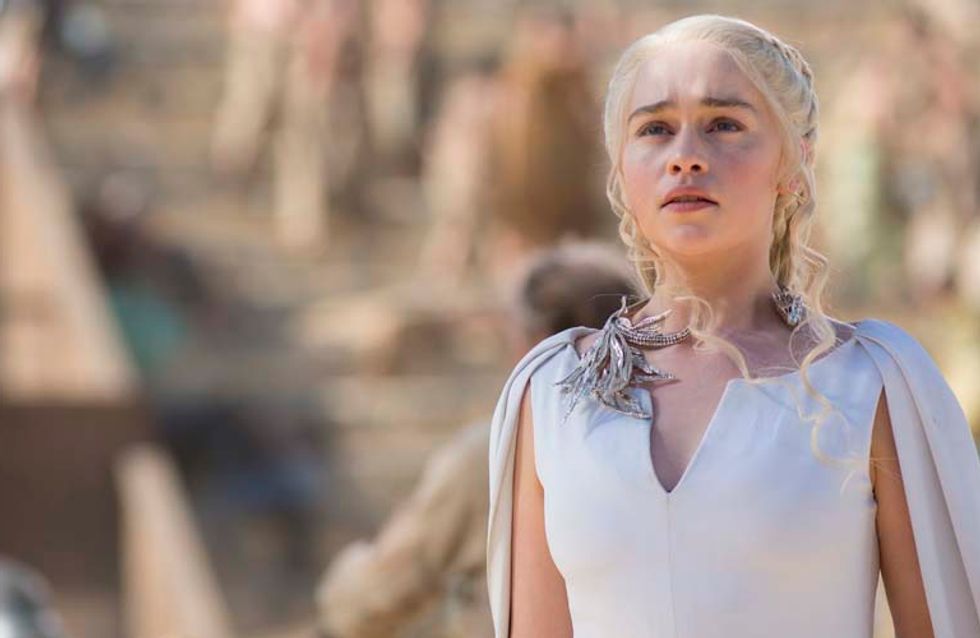 Game of Thrones is immensely popular for good reason. It is an action-packed political drama all in set in a fantasy world (with dragons!), so it's little wonder that we have started to DREAD the ending of season 5 next week before having to wait another year for season 6. Luckily, we've found some shows to could fill the void. So what do you watch Game of Thrones for? Your answer will help you decide...

1. If you watch for...the fantasy factor

Once Upon A Time follows Emma, a loner and orphan who discovers that she is actually the daughter of Snow White and Prince Charming, and that all childhood fairytales are actually histories from other realms. Turning well-known characters on their head, it is Disney as we've never seen it before.

2. If you watch for...the politics

House of Cards focuses on the utter ruthlessness of Frank Underwood, a power-hungry congressman who will stop at nothing to get what he wants with the help of his equally cutthroat wife, Claire.

Outlander is a critically acclaimed show in which a war nurse from WWII travels backwards in end, ending up in 18th century Scotland and immediately meeting the handsome Highlander, Jamie. Let's just say this is NOT a show that shies away from boob shots.

4. If you watch for...the historical vibe

Wolf Hall is based on Oliver Cromwell's rise to power as King Henry VIII's most trusted advisor during the Tudor dynasty.

Hannibal is not one to watch whilst attempting to eat a pulled pork sandwich (been there, done that). A FBI academy lecturer Will Graham is pulled into the field to help catch an elusive (and disgusting) cannibalistic murderer, unknowing that the man committing the ghastly acts is his psychiatrist. Struggling with a social disorder and mentally manipulated by Lector, Will begins to lose himself.

Spartacus: Blood and Sand. The clue is in the title. Gladiator Spartacus leads a slave uprising against the Roman Republic. It's all very season four Game of Thrones. KILL THE MASTERS.

7. If you watch for...the complex characters

In Game of Thrones, we can hate one character at one moment then adore them the next (cough, Jaime Lannister), as none are presented are wholly good or evil, but with ambiguity and conflicting agendas. With this in mind, Breaking Bad chronicles one of the most dramatic character arcs we've ever seen, and if you haven't joined the party of obsessed fans yet, it's high time you do.

8. If you watch for...awesome female characters

Agent Carter is a spin off from Marvel's Captain America in which Steve Rogers love interest Peggy struggles to work as a female secret agent officer in 1940s USA due to the sexism of her peers. So when Howard Stark (Tony's dad!) is framed, Peggy goes against her colleagues to prove her friend innocent.

9. If you watch for...the White Walkers

The Walking Dead follows Rick Grimes, a cop who wakes up from a coma to a zombie apocalypse. Finding survivors along the way whilst searching for his wife and son, Rick has to do whatever it takes to survive, including riding into the zombie-invested town horseback like a freaking badass.

Merlin chronicles the younger years of King Arthur and his faithful companion Merlin in Camelot. Merlin becomes a dragonlord and the Great Dragon is voiced by John Hurt, it's pretty awesome.

How To Get Away With Murder is a murder mystery in which a group of law students working for top notch defence lawyer Annaleise Keating get in way over their heads in a case that is slowly revealed throughout season one (so we can't tell you much more without spoiling it, but GO AND WATCH).

Orphan Black follows a group of clones, all played by Tatiana Maslany, who may or may not actually be several different people and is just lying to us all. Her characters include uptight soccer mom Alison, free spirited scientist Cosima, street-smart Brit Sarah and crazy Ukranian Helena (among many, many more), and to watch all of the characters interact you completely forget it's just one actor and clever camera work.

13. If you watch for...the opening titles

This is the only show where we think it's fair enough to tune in purely for the prolonged (yet awesome) opening credits sequence. True Detective might not have tiny mechanical castles and red leaves sprouting from Heart trees, but it is still freaking cool.

Supernatural follows two brothers, Sam and Dean, as they (to quote Dean) save people and hunt things. The pair use everything at their deposal as they go up against every type of demon, angels, prophets etc etc.

Fortitude follows DCI Morton who investigates a murder in the Artic. It's murder meets snow, so basically you'll feel right back at The Wall again.

What are you going to watch once Game of Thrones is over? Tweet us @sofeminineUK!

What I Learned Watching Game of Thrones Season 5 Episode 9: A Dance Of Dragons

WATCH: The Brand New Mockingjay Trailer Is Here And It Looks Freaking AWESOME