Amid speculation that their relationship is on the rocks, Liam Hemsworth appeared at the London premiere of his brother's film, Rush - alone. The actor and his fiancée Miley Cyrus are rarely photographed together but, even for them, their silence since Miley's controversial VMAs performance seems rather telling. There have been reports that his family are encouraging a split, so is his choice to fly to Chris's premiere a sign that he's picked a side?

The Leicester Square premiere took place last night in London - over 5,000 miles away from LA, where Miley Cyrus is hard at work recording her album.

Liam and Miley rarely make public appearances together, but speculation is rife that this time it's about more than the press.

His solo appearance was made even more obvious by his bro's PDA with ​his wife Elsa Pataky.

And just last weekend the Aussie actor was notably absent from the Barclays Center in Brooklyn for his fiancée’s highly sexualised performance at the VMAs.

Though it's not known why Liam didn't attend, he reportedly didn't enjoy the show she put on.

The last time they appeared side-by-side was for the premiere of Liam's film Paranoia last month.

Reports have suggested that Liam's family is not Miley's biggest fan - something that was apparently obvious at the event.

A source told Hollywood Life: "Liam’s family was there to support him, but they completely ignored Miley when she was there.

Furthermore, recent reports claim friends and family have advised 23-year-old Liam keeps a distance from Miley - for the sake of his career.

Miley is only 20 after all - perhaps an engagement was a touch premature.

She also recently admitted to having a collection of problems - so probably isn't ideal wifey material right now.

She told the Sunday People: "I have so many f***ing issues. I am so f***ed up - everyone does dumb stuff when they are messed up.

“I don’t have a normal life. I take a hiatus every now and again but I’m not good at that.

“All I do is work, so I eat to live and to keep going. People are impressed with me because I can sleep for just 45 minutes - I’m used to it.”

She also spoke to Billboard earlier in the year about how much she hates people listening to her old music.

She said: "My last record I feel so disconnected from - I was 16 or 17 when I made it. When you're in your 20s, you just don't really know that person anymore."

This was the age at which she met Liam on the set of their film The Last Song in 2009.

Maybe neither of them know that girl anymore... 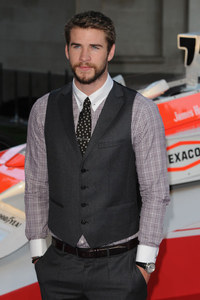 Check out all the stars on the red carpet for Rush here:

Francesca Menato
…
break-upfilm
For all the best videos, memes and shareable news!