by Emmy Griffiths Published on 11 March 2016 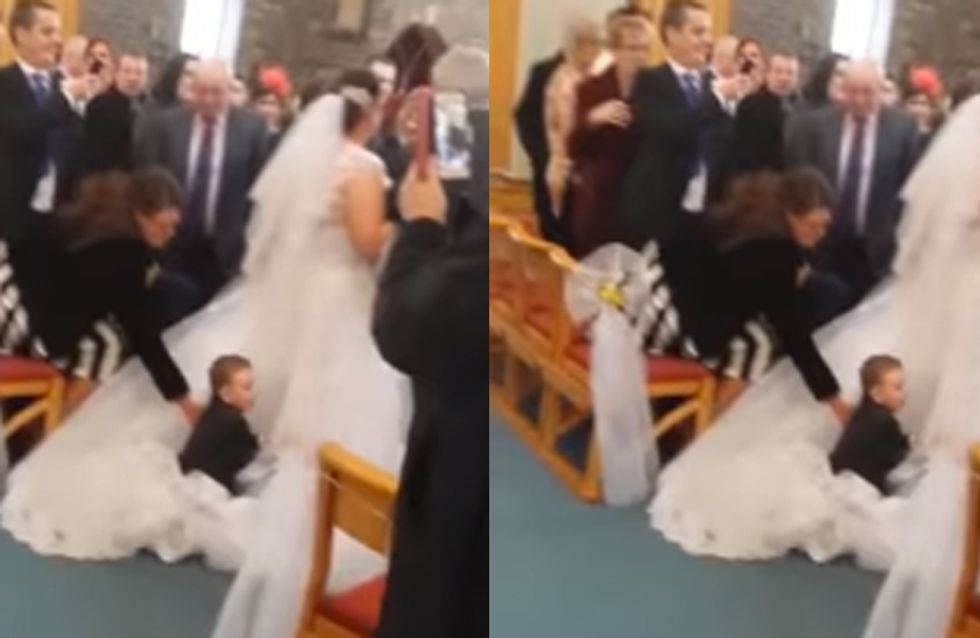 Once, when I was five, I refused to come out of the play area at my cousin's birthday party. Realising too late that everyone else had left to eat cake, I began screaming hysterically, cutting off the happy birthday singsong and causing what my mother still calls 'the most embarrassing moment of her life', purely out of fear of missing out on cake (a fear that remains true to this day). Well this kid just upstaged my crimes DRAMATICALLY by dive-bombing into his Aunt's wedding dress. Kids ey!

On the happiest day of Tanya Malone's life, her trip down the aisle took an hilarious (and excruciatingly embarrassing) turn when her four-year-old nephew Rhys chased after her dress and leapt into it with reckless abandon. Auntie Tanya barely has time to register what is happening, and even smiles as the little boy bounds towards her. Before the dive-bomb that is.

As you would at any wedding where something unexpected and potentially horrifying happens, the entire congregation takes a gasp of breath (all except one man delightedly whispering "did you get that?!" to whoever was filming) as the nearest person tries to grab a hold of him and drag him off.

Since the video is only short, we're not quite sure what Tanya's reaction was, but it sounds like the family had a laugh about it as Tanya's sister Antonia explained to Buzzfeed: "He thought it was like clouds. My sister absolutely no problem with it, and she went on to marry the love of her life."

They even let him pose snuggled in the dress for pictures, adorable!

Aren't kids just the best?! What's the most embarrassing thing you ever did as a child? Tweet us @sofeminineUK!