It made headlines and sent shockwaves around the world when Savita Halappanavar tragically died in Ireland last October. Just 17 weeks pregnant with her first child, the dentist developed E Coli septicaemia and was admitted to University Galway Hospital. It’s been widely accepted that Savita could have survived if the baby – which was the focus of the infection – was aborted, but she was refused a termination because of the country’s strict abortion laws.

Staff at the hospital told her husband that Ireland was a “Catholic country” and they could not abort when the foetus had a heartbeat. She died in agony several days later, after naturally miscarrying the baby.

​Her death put the country’s abortion laws under intense scrutiny, as her life would have probably been saved if not for the fact that abortion is currently illegal in Ireland except where there is a “real and substantial risk” to the life of the mother.

It’s now ten months following the death of the Indian national, and beginning today the Irish Parliament will spend two weeks debating the Protection of Life during Pregnancy Bill 2013.

While many are hoping for significant change to the incredibly restrictive law, others are looking for the notion of “real and substantial risk” to be qualified so that medical personnel are not left uncertain of when to act.

​Currently Irish women who want a termination have to come to the British mainland for procedures, but those who are unable to afford it don’t have that option.

For years this has just been accept by the majority, but though there are still those who fervently oppose any change to the bill, public opinion in Ireland seems to be changing.

​In a recent opinion poll conducted by Ipsos MRBI, 84 per cent of the country’s population supports abortion where the mother’s life is threatened (including by suicide), while 78 per cent believe it should be available in cases of rape or abuse.

But religious leaders, such as Cardinal Sean Brady, have suggested that any Teachta Dála (TDs, or MPs) who voted for the bill in its current form would be excommunicated from the Church.

This message was written on a mobile billboard which they then controversially parked outside of one of Dublin’s largest rape crisis centres.

While the Abortion Bill divides the country, internationally it’s thought that it still doesn’t go far enough to protect women.

​The bill’s conditions require consent of three doctors, which could potentially take too much time, especially in a life-threatening situation.

​In the case of Savita Halappanavar her condition deteriorated very rapidly; would three doctors have come to agreement even in those circumstances, especially when getting it wrong could potentially mean a murder charge for them?

The National Women’s Council of Ireland (NWCI) agrees: “This legislation will only deal with a very small number of cases and will not change anything for the majority of women in this country. Ireland will still have one of the most restrictive abortion regimes in the world. It will provide no solution to women who are pregnant as a result of rape or incest, in cases of fatal foetal abnormalities or where there is a risk to the health of the woman. Women in crisis pregnancies will still be forced to travel abroad for abortions”.

What happened to Savita Halappanavar and her now-widowed husband Parveen is an undeniable tragedy, one which could have been avoided had the restrictive anti-abortion law in Ireland not be in place.

​Hopefully in the coming weeks, after much debate on the matter, Irish politicians will come to the conclusion that the law must be significantly changed to stop this heart-breaking situation from happening again.

Do you think the controversial abortion law should be changed? Tweet us @sofeminineuk 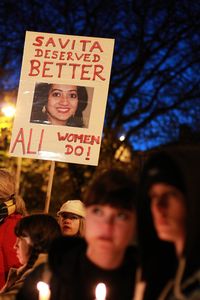