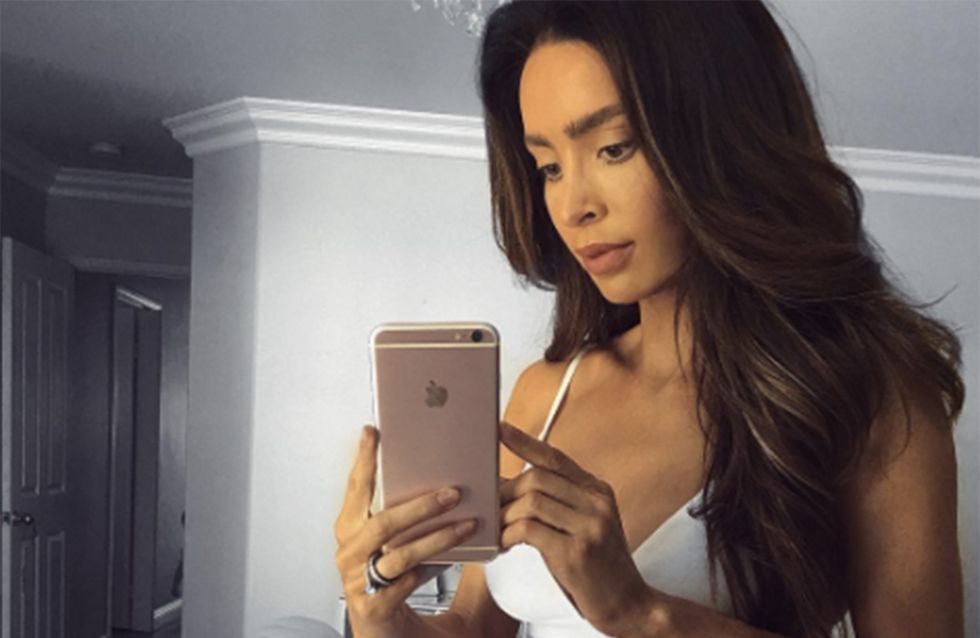 It's not the first time this fitness model has come under fire for how she carries during pregnancy. Now six months pregnant with her second child and still very much displaying a solid a six pack, the people of social media refuse to believe Sarah Stage's pregnancy is healthy or even real. Get ready to do a lot of eye rolling.

Most of us will expand in ways we didn't even know were possible when we're pregnant. Our ankles, lips, nose and bellies may swell as we grow another human inside of us, but that doesn't mean to say that every fellow female will be the same. It's a well know fact that we all carry differently.

Take fitness model Sarah Stage. She's six months pregnant and still very much 'in shape'. She doesn't have an inch of a bump, in fact, her rock hard, carved set of six abs are still very much visible and the people of Instagram are having a hard time accepting it.

What do you guys think baby will be: 💗 or 💙? Getting prepared for baby and these @carseatcanopy covers are a must ✔️They also can be used as a breastfeeding cover too 🙌🏼 GET 1 FREE Car SEAT CANOPY NOW!! HURRY! Use my code SARAH or $50 off site-wide! #carseatcanopy

Sarah's no stranger to controversy when it comes to her pregnant body - the first time she fell pregnant in 2015, she posted a photo of her full-term pre-baby body and the criticism was immediate.

"You should go to a doctor," one follower suggested.

"This is f-cking weird!!!!! Where the hell is the baby?" questioned another.

And sadly the backlash on social media with her second pregnancy is no different, despite the fact she quite clearly carries incredibly well and has given birth to a happy, healthy 9 lbs baby before.

Hope you have a fun and safe 4TH OF JULY! 🇺🇸🍉💥 #fourthofjuly #24weekspregnant #6monthspregnant

The comments range from, "I think there's going to be something wrong with your baby" to countless insensitive quips suggesting her baby simply can't be alive.

Having already developed a thick skin after the backlash surrounding her first pregnancy, Sarah has risen above the negativity and responded in the best way with a body-positive post.

I'm at a place in my life where happiness, peace and joy are my priority 👶🏻 Especially being #6monthspregnant , there's no room for any negativity so please take it elsewhere ✌🏼Baby #2 is healthy and measuring just fine 🙌🏼 I would think that after having James, who was born almost 9lbs and healthy, people would be more understanding during this pregnancy and keep their ignorant comments to themselves ...🙄 we are all different that's what makes us special and unique! Anyway, thank you to the amazing women who have started my Fitness Ebook and everyone who has supported my journey! 😘Been working hard on updates like meal plans, recipes and grocery list! I'm also including special discounts for @proteinworld they have all kinds of products for women who are expecting too 🤰🏻Love you guys ! 💕

Ladies, let's not bump shame. Pregnancy is tough enough without having to question if the visible signs of your baby are making you an adequate mother or not. Every body is different and every (pregnant) body is beautiful, six pack or not.

What do you think about Sarah Stage's experience? Tweet us @soFeminineUK

Top 100 Baby Names For Your Little One

'Wearing A Liner Not 'Cos I'm That Kind Of Wet': Mum Gets Hilariously Real About Pregnancy Sex

16. Co-ordinating outfits
by the editorial team

2. The sex
by the editorial team

18. And should be Christened a few months after birth
by the editorial team