Jake has grown stronger and can be held for the first time, but and excited Gary and Izzy are confused when they arrive at the hospital to see Tina cradling the baby. Tina knows she's crossed the line, but feels overwhelmed with love for the child. She's forced to make the hardest decision of her life.

Elsewhere, an exhausted Eileen falls asleep at work and has to admit she's a mess - she hasn't been sleeping for worrying about Paul's job. Deirdre suggests she talks to the doctor and Eileen's prescribed sleeping pills - but she knows it's a short-term fix to a long-term problem.

​Also, Karl gets agitated as Dev questions whether Sunita was even capable of starting the Rovers fire in her drunken state.

Gary and Izzy are reeling from Tina's bombshell that she's going to keep Jake. Shock turns to anger and they tell Tina that Jake is their baby biologically. But - hating herself - Tina tells them she feels like Jake's mum and she and Tommy could offer him a stable home. Izzy is devastated and vows to fight Tina.

Elsewhere, Paul saves a child's life at work but lies about his heroics for Eileen's sake. But he realises they can't carry on this way when he finds out Eileen is taking sleeping pills.

​Also, Karl urges Dev to stop his quest to prove Sunita's innocence as people are worried about his mental health. 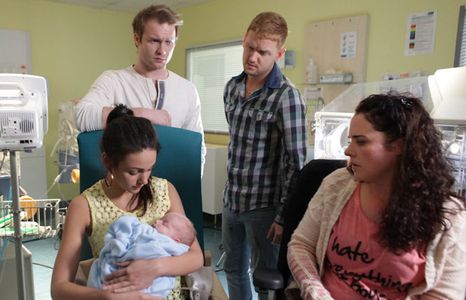