As Lauren shows no sign of turning her drinking habits around Max starts to point the finger at Tanya - how could she let it get this bad?

Cora tells Tanya she's going to need help but Tanya insists she can sort it out.

She's proven wrong when Lauren disappears to The Vic behind her mum's back.

When she comes back drunk Tanya makes a drastic decision and puts locks on all the doors.

When Lauren in the Vic she caught up with Peter, who's back in the square and dealing with Lucy and Ian's spat.

Not knowing exactly why Lucy's shutting him out he tells her she's being too hard on him.

Meanwhile, Michael is still furious about Janine and takes it out on Scarlett.

Later, he apologises for being so mean while stealing Janine's house keys.

Alice catches him in her house searching for clues. As she tries to get him to open up to her they share a brief moment, before he walks away.

Dot is given the church warden job after the priest sees how well she handles a drunken Lauren. 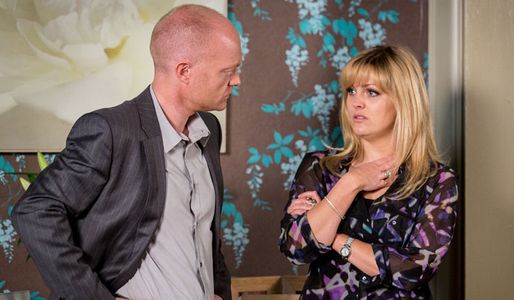 EastEnders 17/06 - Max struggles to face up to Lauren's problem