Tanya decides to tackle Lauren's drinking once and for all.

She trawls the house for bottles and even finds one hidden in Oscar's things.

Lauren asks Max to move in with him but he sees that she just hoping to escape the detox.

She starts opening up to her mum but Tanya soon realises it's all an act to get a drink.

She distracts Tanya and makes a break for the door with her keys.

With her hands too shaky to open it she runs upstairs and climbs out of the window.

Max arrives and as Lauren is running away Tanya tells him to let her go - they've lost her already.

Michael regrets what he's done with Alice and is quick to give her the slip when he sees her.

When she plans a romantic night for them he is forced to break her heart, telling her that he used her for sex.

Dexter continues to rage against Sam and he finally agrees he'll leave if that's what he really wants - is it?

Lucy and Ian keep putting Peter in the middle of their personal battle and when Lucy finds a letter from David to Carol in the safe at the restaurant she's sure there's something shady going on. 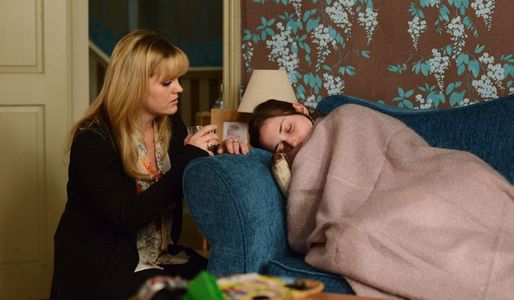