Belle helps herself to a bottle of vodka at the Dingles'. Debbie later finds Belle drunk and, feeling, guilty about how she's treated her, tells her to go to Tug Ghyll where she'll help her sober up and resolve things with her parents.

But when Debbie arrives home later, she finds Belle passed out in her own vomit. Debbie can't get Belle to wake up and sends Sarah to get help. Sarah finds Cameron and when he arrives, he sees the vodka bottle is one of Debbie's. Belle's taken to hospital and things don't look good.

Elsewhere, Katie is unconvinced when Declan tries to win her back. She tells him she'll take him up on his offer, but Megan doesn't trust her to keep quiet about the body.

Also, Pollard and Val find out about Kerry and Dan. 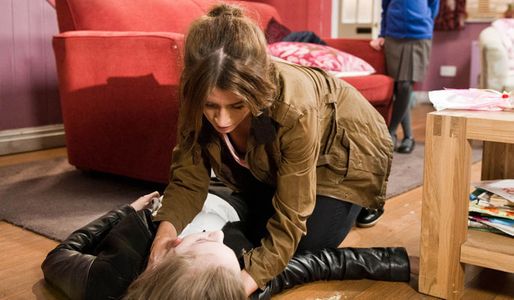 Emmerdale 05/08 - Rhona's rushed to hospital after a dodgy deal