Robbie takes pleasure in telling Zak, Cain and Diane that it was Debbie who mixed the lethal blend of vodka. He sticks the knife in further when he sarcastically tells the fathers how proud they must be. He leaves the pub, knowing revenge is done.

Elsewhere, Cameron warns Debbie what Robbie has done, before Belle arrives home, feeling weak and ashamed. Debbie arrives to a cool reception and is forced to face the wrath of her family. She later goes to collect the kids from Andy, but after hearing the rumours he turns his back on her.

Debbie pounds her fists on Andy's door, but when she sees Robbie across the street she rushes over to attack him. Diane tries to break up the fight as Debbie tells Robbie she'll kill him for what he's done.

Later, Debbie tries to talk to Robbie in the pub but her words fall on deaf ears. But Cameron does, and Robbie soon has to deal with a very unhappy Cameron.

Elsewhere, Gennie's not sure about Brenda's plan to spring a surprise wedding on Bob. But Nikhil soon finds out it can't actually be done because of licensing.

Also, Dan realises Kerry has left him and taken his van with her - but just before all hope is lost, she returns to the village. 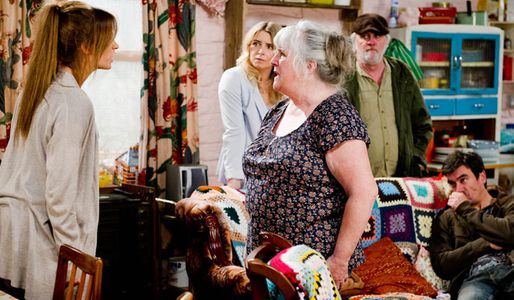