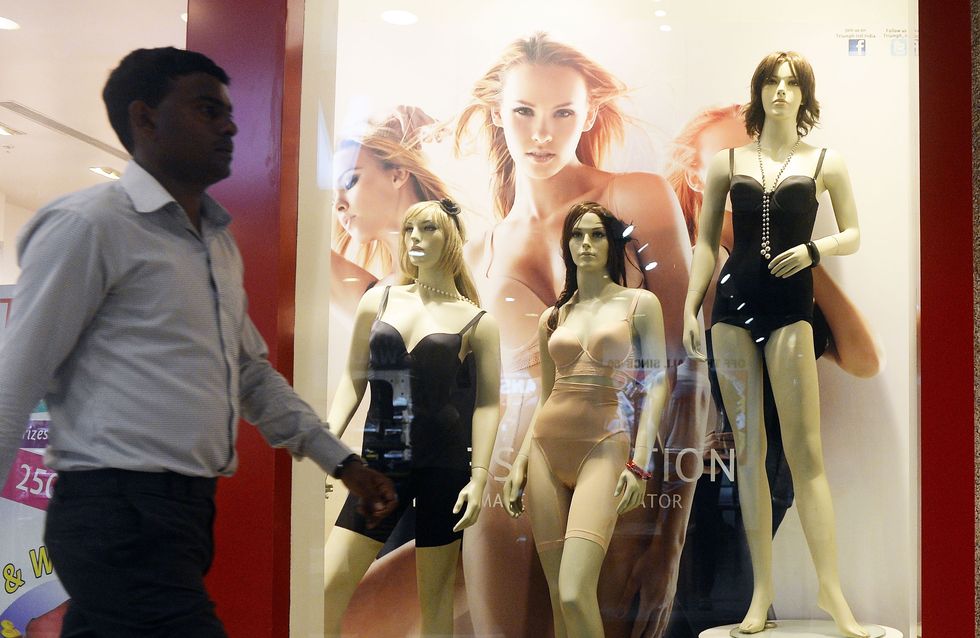 India’s latest initiative against rape? To ban the display of bikini-clad mannequins in shops in Mumbai. The proposal, which is supported by the Brihanmumbai Municipal Corporation would allow civic officials to force shopkeepers to remove inappropriately dressed mannequins throughout the city. If approved, Indian women could see the country's decision makers attack female mannequins rather than protecting women from the risk of rape.

The city of Mumbai holds the second highest number of incidents of rape in the whole of India. A country where according to the National Crime Records Bureau, one woman is raped every 20 minutes – even though Police estimate only 40% of cases are reported. And as if these statistics weren't already depressing enough, in the past three months alone, 24,000 cases of sexual violence are pending before high courts. India has a huge problem with rape.

Only last December a woman was so brutally gang raped and assaulted by six men on a bus that she died from her injuries. That incident alone sparked national protests, international outcry and exposed the extent of sexualised violence towards women in India today.

What matters now is that the Indian Government follow through on their promise to do something about this growing issue on their own soil. So what has been done so far?

Apart from the mannequin ban proposal that has received some obvious criticism (how is that going to help?) there have been other similarly questionable initiatives.

Back in January 2013 the Information Technology Minister Kapil Sibal revealed that Government officials were in the process of developing a GPS watch to reduce crimes against women. They hoped that by building a watch which, (if pressed) sent your location to the nearest police station along with a text message to a family member to alert them that you were in danger, could effectively reduce rape crimes.

There was also a 24 hour hotline set up in Delhi to provide help to women round the clock with the ability for counselors on the end of the line to offer relevant phone numbers of government agencies and in some case even the police.

After this The Wall Street Journal reported that Indian women have taken to carrying their own form of pepper spray using chilli powder and manicuring their nails into sharp, pointed talons for protection.

Juhi Nondi a student told the Wall Street Journal: "They're not just for fashion," she says of her pink nails, "but also for self-defense."

It could be said that this most recent development targeting “underdressed” mannequins is much like these other initiatives – a headline-grabbing quick fix attempt at handling the problem with no tangible promise for real change.

It might be that possibly, just maybe, mannequins, a watch that sends a GPS signal and a hotline are not the best ways to tackle the shocking rape problem in Mumbai and in India more widely.

What has been done elsewhere:

There’s no doubt that we live in a world where in some places it is unsafe for a woman to live her life simply because she is a girl. Marital rape is still legal in some countries, in others, domestic violence is seen as a norm. But how do you propose to overcome a problem like rape and violence towards women, which is so complex and sometimes deeply routed in society?

There is no simple answer, but there has been promising change. The UN pledge to 'Say No, Unite Against Violence towards Women' has seen 50 governments worldwide commit to ending violence against women. Through changes in law enforcement, education, grass roots operations and proper support networks, countries from Afghanistan to the USA are finally seriously looking into what they can do to stop violence towards women. FYI The Indian Government is not on that list.

From public campaigns like 'The Line' - promoting respectful relationships in young people in Australia - the “Men promise' campaign in the Dominican Republic against femicide, and the ‘House without Violence’ campaign aimed at preventing domestic violence in Belarus, efforts to challenge the rate of crime against women are taking place.

But most importantly countries have given are are continuing to give strength to women through the law and justice system.

Canada has recently passed laws lengthening sentences for child sexual abuse and has increased penalties for those who produce and traffic date rape drugs. The Brazilian Government has committed to implementing Maria de Penha law on Domestic and Family violence, which calls for stricter sentences for offenders as well as shelters for women survivors.

While it's inspiring to know that there are so many intiatives and actions happening to support women and to fight against violence and rape, there is still so much left to achieve.

If the mannequin proposal does go through in Mumbai, it will be a discouraging day for women. Rather than re-educating society, attempting to change social attitudes, or focusing efforts on fighting rape with results focused measures, they are carelessly putting the onus on women being responsible for their safety around men. If covering up plastic mannequins to dress in a more demure manner is the best they can come up with, we're not expecting that one in every 20 minute statistic to diminish any time soon.

What do you think of India's mannequin proposal? Publicity stunt? An insult to women and men? Or a good way to tackle rape? Tweet us @sofeminineuk​